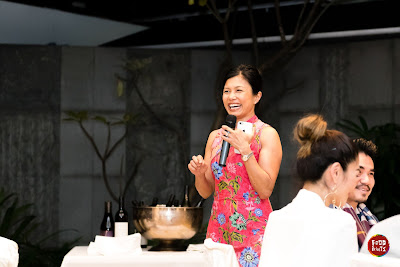 Audra Morrice first appeared on all our radars as a contestant on MasterChef Australia. She was a finalist in season 4, coming in third, just one cook off away from gunning for the top prize. She has not looked back since then, going from strength to strength. She has quietly built a cooking empire, from penning her own cook book “My kitchen – your table”, to anchoring her own tv show “tasty conversations” to becoming a judge on “MasterChef Asia”, rubbing shoulder with cooking greats like three Michelin starred Bruno Menard as well as celebrity chef Susur Lee.


Most importantly, Audra Morrice is Singaporean #pride. Imagine our excitement when we were invited to a dinner hosted by her at the Pool Grill in Marriott Hotel

Five delectable dishes to dive into, try to keep up. 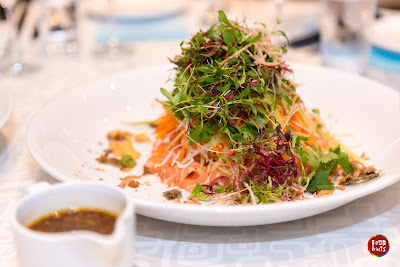 We started with Audra’s interpretation of “Lou Hei” Lou Hei is an annual affair for most chinese, we’ve long grown accustomed to the familiar taste of plum sauce and kumquat paste. Audra’s version was wetter, as she dressed the dish with citrus soy. Audra encouraged us to go wild with the tossing, much like a good old Lou Hei, but there was not a single congratulatory phrase mentioned in the whole restaurant (probably all too shy around strangers)

The flavours generally worked, and it was a refreshing change from the usual Lou Hei. There was a crispy element to it, in the form of crispy fish skin but there were too few to be found, and the crackers are the highlight of any Lou Hei.

We paired this with a glass of Chardonnay 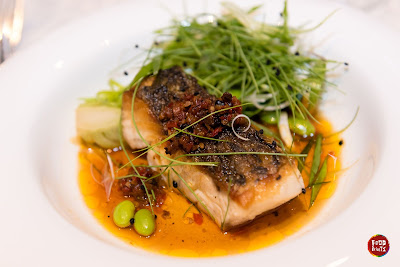 Next came the Pan-seared Barramundi dressed with a Black Bean XO sauce. This dish was the highlight of my evening. I would say that fish is one of the harder protein to master. Compare it with a protein like beef, if you are not careful with the timing, a medium rare might become a medium, but a medium steak is still not a bad steak. On the other hand, a under-cooked fish is hardly edible while a overcooked fish turns it flaky and dry and within a very short time span, a fish can turn from perfectly cooked to overcooked.

The execution on the fish was perfect, the meat was tender and moist, I am very particular about fish skin and I am almost always disappointed that most chef do not give the skin enough attention but over here, the skin was given all the TLC it needed to be seared to crispy heaven.

The cooking was clever as well, the black bean xo sauce was well balanced, light enough to accentuate the freshness of the fish, highlighting it as the star on the plate.

We paired this with a Riesling 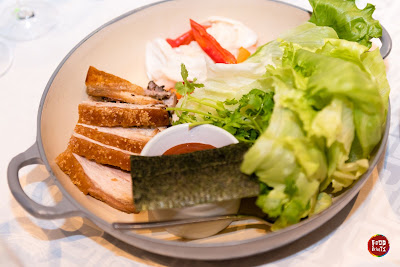 Audra’s cooking is both homely and unpretentious and the next dish showed just that. Once again, perfect execution. Fats that melt in your mouth, and more crispy crackling. I am thoroughly enjoying myself because of all these crispy components. Often overlooked as just a side show to the more important meat component of any dish, I love that Audra was attentive enough to pay the skins some TLC.

I believe she held back on the seasoning on the pork as gochujang has an intense profile. This dish required us to wrap our own “bao” using ice berg lettuce as a bun. Carbs free so all at the table rejoiced!

We had a Shiraz to go with this 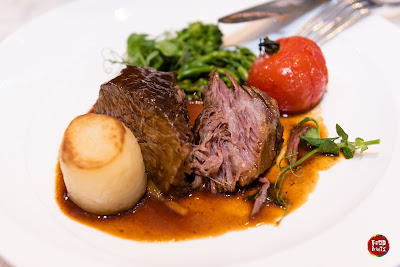 The last entrée we had was braised Westholme Australian beef short ribs. I find that slow braise is one of my favourite cooking method when it comes to beef short ribs as only this method allows for tender, "cuts through like butter" ribs.

While the execution of the meat was immaculate, the Gula Melaka gave the dish a sweet finish which drove my taste buds crazy. As a trio, we could not come to a consensus if this sweetness complimented the ribs, so i'll rate this as "interesting" 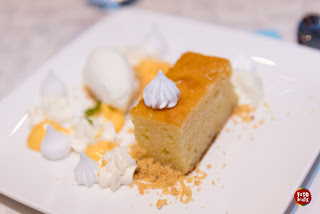 Watch enough MasterChef Australia and you will know that a contestant need to be able to whip up a decent desert. All 3 judges, Gary, George and Matt have a soft spot for a well-executed desert, and the pressure test is famous (infamous?) for setting juggernauts of desert for contestants to recreate using a recipe.

Which is why it did not came as a surprise that the desert was such a delight. Beautifully light and soft sponge cake, paired with the sharp tartness of that yuzu curd as well as lemon verbena

Each element might not be able to sing a tune on its own, but it came together nicely as a beautiful symphony.

Audra will be hosting 3 more dinners at the Singapore Marriott Tang Plaza Hotel, which is happening on the 27th, 28th and the 29th of October. A five course wine and dinner pairing will cost you $128nett, this represents superb value.