Get a immunity boosting dinner at Ginett. 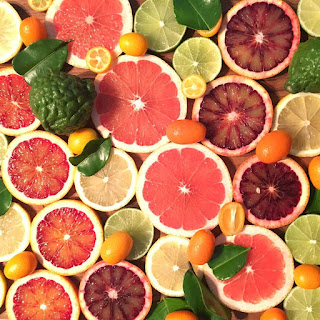 The few times I had French food got me acquainted rich complex flavours. Sauces were strongly reliant on butter and cream, meats were gamey and cooked in fat. People who loved it described it as a hearty meal, others described it as greasy and heavy. Perhaps then, you can understand why I had to do a double take as I received an email with the title “Get Refreshed with a Gastronomical Fiesta at Ginett”. This is just not the French cuisine that I’ve come to know and enjoy.

Ginett is a contemporary restaurant and wine bar situated in Hotel G, along middle road They import their wines directly from France which is why they have more than 70 labels available and are able to offer wines starting from only $6++ per glass. Every Tuesday is ladies night, a group of 4 ladies are entitled to a bottle of Rosé or sparkling wine, regardless of spending.

Often times, we hear that Cuisine du potager (cooking from the garden) or cuisine du marché (cooking from the daily market) are the foundations of French cuisine. The French were always eating seasonally and locally. At Ginett, this is no different, from 1st November 2017 to 2nd January 2018, they’ve launched a citrus menu to take advantage of the best harvest available during this period.

On that note, lets kick off this review exactly the way I kicked off my night; with the cocktails first. The Gin Fizz, Grapefruit Sour and Sangria are all priced at $16++. 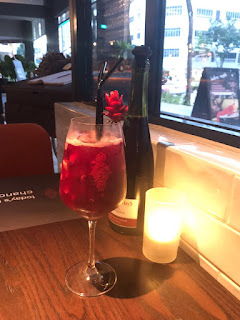 The Sangria looked innocent enough, in a lovely shade of red, with plenty of cut fruits mixed in, making it look deceiving light and refreshing while disguising its actual potency. The rum was able to bring out the flavours of the fruits and it was just the perfect way to kick start my evening. 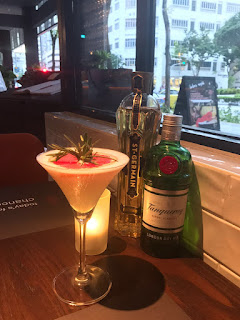 My partner on the other hand enjoyed the Grapefruit Sour.  Tangueray gin and St Germain Elderflower Liquer aside, the mixer element in this cocktail are lemon and lime juice as well as grapefruit juice. It is your refreshing juice on steroids. 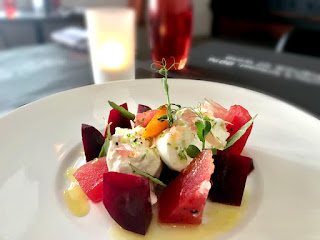 The first item presented was the Burrata Cheese ($32++). The Burrata Cheese itself was exceptionally soft and melts away in your mouth, but the truly clever bit was the pairing of the fruits with the cheese. it was previously unimaginable that there will come a day where I would be having watermelon and beetroot with cheese, at the same time and find it an amazing experience.

In fact, my partner was still not picking up her fork, looking on skeptically as I dug in.

Yes, it was just that good. 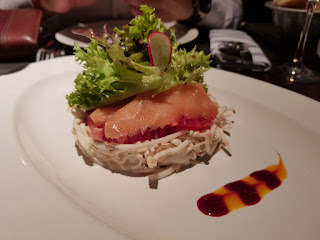 Salmon Celeriac Salad (30++), while most Singaporeans are familiar with celery (I personally prefer Salary), the celeriac is not often seen and served. The celeriac is actually the root portion of the celery and has a very earthy taste, similar to a turnip. Celeriac has got a high-water content and it was very juicy, reminding me of Kueh Pie Tee.

Overall this dish paled in comparison to the Burrata Cheese, while the flavours generally worked together, i did not particularly enjoy the texture of the celeriac, as it was a tad too raw and crunchy for my liking. 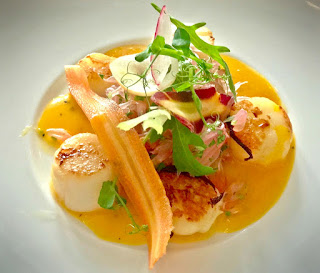 The mains were next, and we had Pan-Seared Scallops ($36++). After years of watching Gordon Ramsay holler away in Hell’s kitchen, I’ve grown to appreciate the finesse required in cooking scallops, undercook them and you run the risk of food poisoning, overdo them and you have a piece of rubber sitting on your plate. These scallops were fresh, huge and seared perfectly. Scallops and mashed potato is such a classic combination, upgraded with the addition of pomelo to the mash. These was another clever pairing that was hard to imagine previously, the soft velvety mashed potato was nicely balanced with the freshness of the pomelo. I really enjoyed how measured the whole dish was, with strong emphasis on the fresh crisp taste of the individual ingredients. 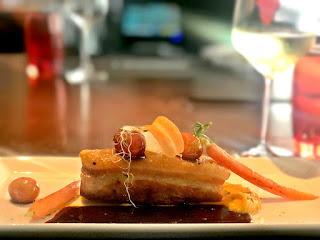 The Pork Belly ($36) with kaffir lime leaves came with a side of pumpkin mash. Slow cooking brings out great textures in meats, and this was no different. While the meat was tender and succulent. I took issue with that this dish was one dimensional and could have done with a crispy or a crunchy element on the plate. Unfortunately, the skin was not as crispy as i would usually like it and the sauce was too light and subtle. 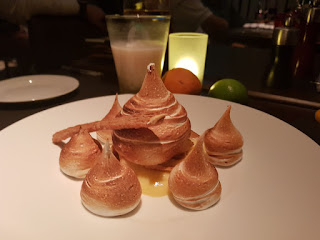 We had  Citrus Lemon Tart ($12) for dessert. The tart looked majestic as it was being served to our tables, huge domes of meringue sat above a beautiful tart. It is simple classic flavors, executed well, and really an enjoyable experience.

While it was a truly exceptional dessert, I would argue that this dessert felt a bit out of sync with the rest of the menu. Throughout the night, there was a very strong theme of freshness. Flavours were light and refreshing, but the lemon tart was a decadent and intense affair.

Aside: i was surprised that for a Citrus centric menu, there was only one dessert option. Conventionally, fruits are generally used sparingly in savoury dishes while they make some of the most delectable desserts known.

The price of the dishes were interesting to note as well. While the mains were well priced at $36++ each, the dessert was superb value for money at $12++, yet both starters are priced just slightly less than the mains at $32++ and $30++. This represents poor value

Overall, i noted that most dishes used the citrus flavours as a trusty side kick to a main show instead of using them as their hero ingredients. The menu might be new and contemporary but you can still see and taste the classic french techniques involved in bringing about the menu. The flavours are bold and bedazzled me with their combinations.