Tiger's Milk- Have you had it? 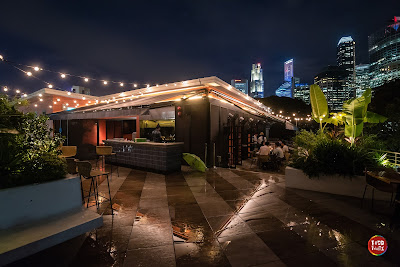 Ceviche is a dish popular across coastal regions of Latin America. Though originating in Peru, it is also found in Colombia, Ecuador, El Salvador, and now, in Singapore.


Tiger’s Milk is Singapore’s first Peruvian restaurant and has perched itself atop the Club hotel where it now calls home. It opened its doors in mid October and the Ambassador of Peru himself has graced the place with his presence, and praise for the authenticity of the dishes prepared. Dishes such as Ceviche, of course. 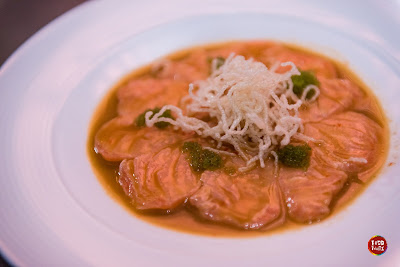 The dish is made from slices of raw fish, cured in a citrus marinade of lime, lemon and fish juices, with added heat from aji peppers and then given further flavor from cilantro and onions.


The restaurant gets its name from Leche De Tigre, a Peruvian reference to the fiery citrus marinade used to prepare Ceviches, which loosely translates to "The Tiger’s Milk" in English.


This concoction became so popular it became a dish unto its own right and is now served in shot glasses as an aperitif, prized for its purported aphrodisiac qualities. Like the aptly named Tiger’s Milk, some evenings get a little too wild, and this is said to cure hangovers as well.


There are as many ceviche varieties as there are Leche’s and we started the evening with a trio of Amarillo, Rocota and Nikkei Tiger's Milk preparations. 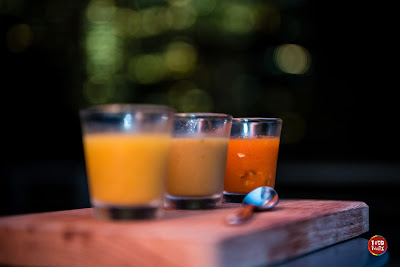 Each shot of Tiger’s milk is an intense multi-layered gustatory experience. As the use of varied chillies and seafood (seabass, octopus) each lends its flavor notes to the character of the concoction. Some had more briny hints, others a little more astringent, but all were good.


Peru has had a fair amount of cultural influence from Japan ever since the first immigrant arrived a century ago on the Sakura Maru. Not surprisingly, ceviches are very much like sashimi, with similar dishes like Taradito Nikkei being a mix of the two. For our evening we enjoyed the Salmon Nikkei Ceviche with yuzu and ginger dressing, complemented by wasabi tobiko and topped with crispy vermicelli.


Unless you intend to visit Lima anytime soon, you must absolutely have the Classic Seabass Ceviche, topped with Aji Rocoto pepper, red onions and grilled corn. This is served with sweet potatoes which together with the corn balances out the sharp tangy flavors of Peruvian ceviche with a more mellow sweetness. 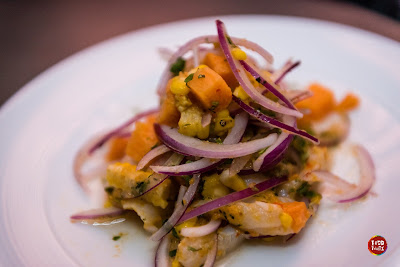 Being an important staple, corn features prominently in Causa, a dish made from layers of potatoes, shrimps and sliced avocado with Aji Amarillo and topped with Chopped eggs. It's a welcome change from the astringency of the Tiger’s Milk which we have come to really enjoy. 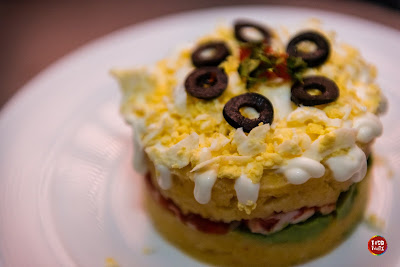 Anticuchos
Not everything is about raw seafood though, Tiger’s Milk serves Anticuchos, Peruvian style meat skewers, more commonly found in food carts in the streets of Peru than on a rooftop in Ann Siang. In Pre-Columbian times, these were made with llama meat. These days, beef, lamb and chicken are used instead. 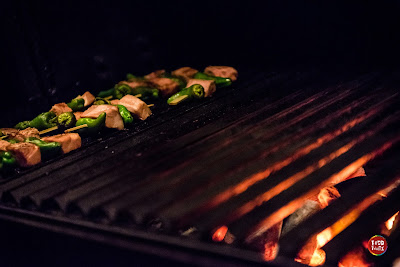 Much like ceviches, anticucho also come in classic versions, and versions with more familiar tastes to the suit the palates of local diners. 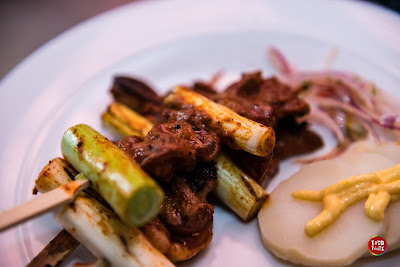 Generous morsels of lamb heart are marinated in a harrissa paste and served with salsa criolla. It's easy to get a dish like this wrong, with lamb being an acquired taste, not to mention the lng chew that comes from the tenuous gristle that often accompanies offal meats. Thankfully Tiger’s Milk managed it well. So do give it the time of day if you’re tired of chicken hearts at the churrascaria.


For a more subdued meat dish, the Pork Neck Anticucho served with Shishito peppers and glazed with Yakiniku sauce would be your choice. It does not stray very far from its Japanese roots and its tender bites are so easy on the tongue. 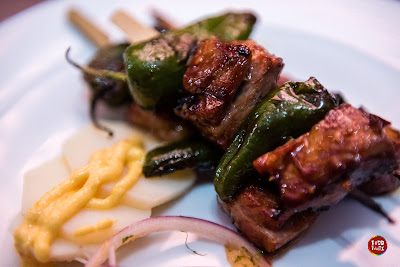 Having checked off the boxes for savory, sour and spicy we now move to sweet with a skewer of caramelized pineapple wedge served with vanilla ice cream. Despite being smoked o. The grill, the pineapple retained its juiciness and its subtle smokiness paired very well with the clean finish of the vanilla ice cream made a without being overly saccharine sweet. 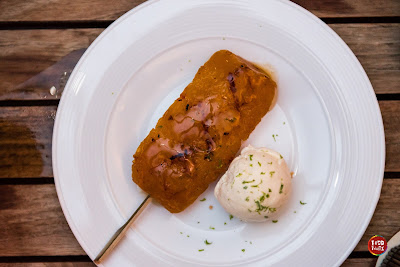 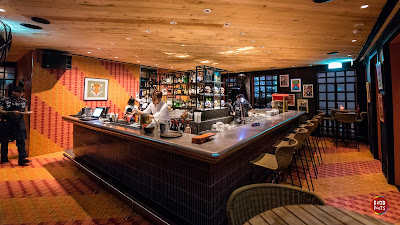 Piscos are Peruvian brandies and Tiger Milk’s bar is stocked full of them. The rooftop setting is perfect for a quiet drink as you sip from one of many pisco based cocktails including the classic Pisco Sour made with lemon and shaken egg white and delivered with a frothy finish. This national cocktail of Peru is served with a gentleman’s pour so do expect a potent kick. 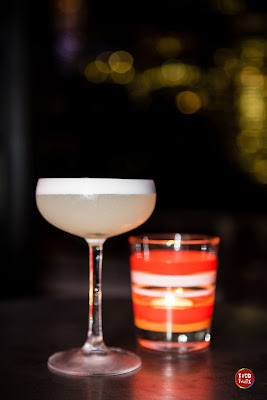 The piscorinha is a Peruvian rendition of Brazil’s Caipirinha replacing the sugarcane based Cachacha with the grape derived pisco. Tiger Milk’s version toasts to the flavors of South East Asia with calamansi, passion fruit, sour plum and then topped with champagne, making for a thirst quencing powerhouse that is at once unique and yet surprisingly homely. 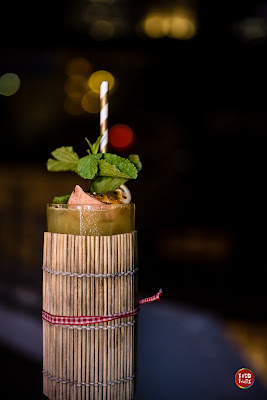 The strongest drink of the evening was a mix of midori, Cointreau and juice from the innocuous Granny Smith Apple resulting in a deceptively potent but oh so sweet Pisco Verde. 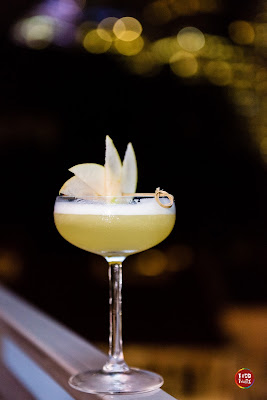 For an interesting take on a local favorite, try the Coco Con Pisco, where a hollowed out coconut is used to serve Campo de Encanto Acholado infused with pandan, frangelico, Malibu, Rock Melon, and unbelievably, Kaya (coconut egg jam). It's nutty both in taste and concept and at least one of us really loved it. 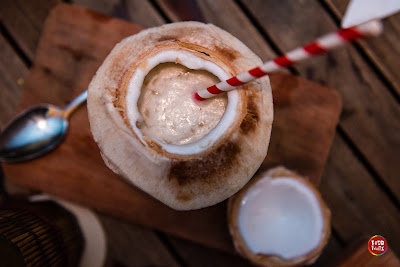 Our first experience of Peruvian cuisine was an enjoyable one. There's a certain delightful weirdness about it all, which owes itself to the wide ranging cultural influence that Peru has been exposed to.
Taste wise, it's distinctive enough to distinguish itself from the milieu of steakhouses, ramen bars and chain restaurants that keep popping up. Yet there are all these familiar elements, at times hints of chinchalok and tom yum, that keep it immediately relatable.


Certainly worth checking out.