The Pancakes went for the Beer Tasting organised by Blue Hall this weekend.  It is a great deal, you get finger food and the most valuable of it all, you get to listen to the master brewer!


Mr Pancakes read an article on why beer can be one addictive activity, simple reason, the process of beer drinking engages all our senses, making it a very pleasurable experience.


Sight: The tiny bubbles that fizzles through the beer gives a fuzzy feeling. Like champagne.
Smell: The distinct smell of the hops. (acquired taste but nonetheless attractive)
Touch: The cold surface of the beer mug.
Hearing: The 'chink' of beer mugs when toasting.
Taste: The fruity, bitter taste of beer.


Experience: Beer is usually drank with a group of friends in a laid back social gathering. It makes us feel good inherently. And the alcohol dilates our blood vessels, making us feel relax. Add the process of beer drinking with all 5 senses engaged, no wonder it's a very theraupetic and desirable experience!


(The crappy thing is what you get the next morning... if you drink too much. Otherwise it's... BOOMZ.)


Anyway, back to the tasting part. Will share more on the brewer's story and my thoughts in the later part of this post. 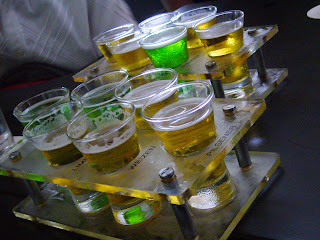 The group were initially given three samplers. And as the master brewer went on. He decided to serve us an extra tasting portion. Very nice of him, so that we can have a full range of taste. Here are some of the tasting notes.


Apparently all their beer is unfiltered which lends the different flavours to the beer as compared to bottled beer. Filtered beer not only remove the yeast, the flavonoids are more often than not removed. (according to the brewer.) 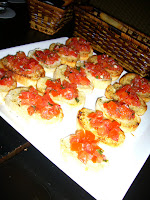 The side dishes were so-so. But then again, who's here for the food? Those who had been there before vouch for the grill items on the menu. Shall have a go at it the next time the Pancakes visit.


And yes, we had a tour of the micro-brewery, which Ernest Ng (the master brewer) designed and built himself, after years of home-brewing and studying the subject. And it did help that he was in the construction business for a long time before moving on to being the first local brewer. (which i think is amazing by all standards.)


And yes, the master brewer, Mr Ernest Ng himself. He started off in the military and then after that to construction business. Finally turning his passion into a business. And that is one BIG thing to Mr Pancakes. Mr Pancakes always believe that if you keep doing what you love (ie passion) and keep on improving until you are good at it, someday, you will reap the benefits (with proper planning). And this man is one classic example.


Ernest knows his stuff inside out. Mr Pancakes was impressed by his biochemistry knowledge on the full process of beer brewing. Right down to the enzymatic reactions and the different parts of organic chemistry reaction. But Ernest totally blew Mr Pancakes mind away when he started to dwell into the anatomy of the barley grain. It was CRAZY. And during the tasting notes itself, he also talked about how the human tongue detects taste. Yes. That is the kind of details he went into. And of course during the tour of the micro-brewery he again spoke about his stuff.


You can tell and feel the passion in this man. He shares his knowledge and you always have this feeling that there is sooooooooo much that he wants to share and he can't wait to share. He even asked us to take pictures freely. I was totally inspired by him. And yes, he definitely got no airs. Ernest is the type of person you can just go up to and talk to him. At the later part of the tasting, he just dropped by our table and just talked. Sharing his experience of working with Thai construction workers and his plans of a new branch at Boat Quay.

Oh yes. I forgot to mention that the tasting comes with 4 towers of beer. And for the 18 of us.