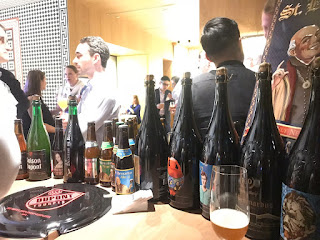 Talk to anyone on the street about Belgium and ask them about the names that comes to their mind, we can bet that apart from the odd people who will comment “Eden Hazard”, “Kevin De Brunye” and “lukaku”, these are your football fanatics, most people will know “Stella Artois”, “leffe” and “Hoegaarden” in recognition of the immense exposure of the Belgian brands on Asian Shore.

Belgium is a country in Europe, roughly 44 times the size of Singapore and with a population of 11million slightly over double that of Singapore. While they are not big, nor are they heavily populated, a quick search on the internet shows that they are home to more than 180 breweries, making so much beer that roughly 60% of the beers they produced are exported. On average the Belgians also drank about 93litres of beer per capita, easily placing them on the top 10 list of countries that drank the most beer. For everything that they lack in size and quantity, they make up for it with variety. They have the greatest diversity of beer style in the world, and they would be unrivalled in brewing heritage which is deeply embedded in their civilization. Throughout the years, they have succeeded in marrying innovation, new techniques with a strong respect for tradition, making a strong argument to say that they are the best country in the world for beer.

If I draw up a list on some of my favourite things to do, going to an event where (great) beer are flowing freely will always rank among the top 5. While less agree-able people usually comment that I have a drinking problem, I think they are mistaking a healthy obsession for addiction. To say that I have a drinking problem is akin to saying that Bruce Lee has a Kung-Fu problem or that Elvis Presley has a singing problem or that Michael Jackson has a Dancing problem. You get the gist, there simply is no problem if you’re the best at something.

Tuesday night was simply divine, for about 5 hours, top quality Belgian beer and finger food were flowing freely. We were also privileged to have the Ambassador of Belgium, Mr Andy Detaille, join us in this event, who graciously shared about the drinking culture in Belgium and how the production and exportation of beer is big business for the Belgians.

Now on to the beers, apart from the usual commercial brands, we had an opportunity to taste beers that were made on a smaller scale, not losing in taste, complexity and flavours of the larger scale, commercial brands. It would be impossible to actually rattle off all of them and capture your attention at the same time, so here is the list of most memorable beers. 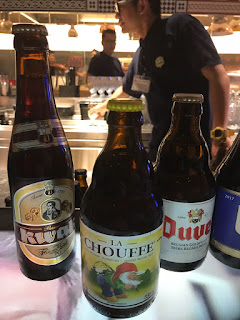 Chimay is a Trappist beer. The beer is actually brewed within a monastery and brewed by trappiest monks. The legend was that water was not safe to drink way back in the early days and monks who were literate, brewed beer that was both safe and cheap to drink. Profits made must be used within the monastery or donated to charity. Beer drinking and social responsibility, must rank as one of my favourite combination. Chimay Red and Chimay Blue both exudes a fruity aroma, the Red is slightly sweeter while the Blue comes with a spicy and peppery after taste. 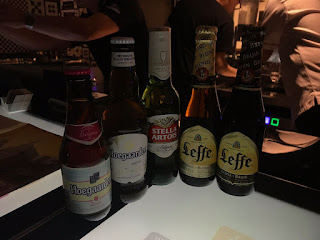 We also spent some time talking to the kind people who were serving up Stella Artois and Leffe, these are the commercial brands which are readily available. In Singapore, the majority are not beer enthusiast, with profound palettes and ideas of how an award-winning beer should taste like. But we can all agree that Singapore is a food heaven, in terms of variety of food available, a good beer should most importantly, be served cold and be able to pair nicely with local food. Both Stella and Leffe hits the mark. Stella in particular, is pleasantly bitter and has a very refreshing finish, making it extremely versatile for pairing with food. We also found out that there are a total of 9 Steps in pouring the perfect Stella, any one of the steps not done right would result in a beer of inferior quality. 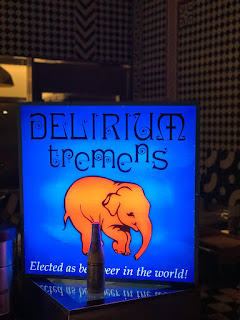 We also had a go at Delirium Tremens, voted the "best beer in the world" back in 2008, back at the world beer championship. The beer certainly lived up to its name, it is one of the prettiest bottle I've seen and the beer itself was distinctively bright golden. Crisp and fresh, it was certainly one of the better beers I've tasted. Despite coming in at 8.5% Alcohol, it doesn't give that alcoholic punch i was expecting.

Certainly overdid the alcohol tonight despite it being one of the most satisfying tasting i had the chance to do this year.

Over this festive season, if you drink, don't drive. stay safe!