Tiger Beer - it don't matter if you're black or white 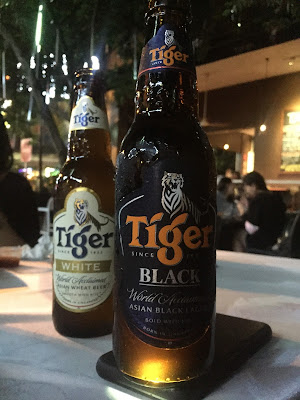 This is a review of Tiger's latest brew: the Black and the White. Look away now if you're under 18 years old of age or if you frown upon drinking

Before I start, let me first qualify myself. I’m a beer drinker, on a scale of 1 to 10, my love for beer is a 11.  I was pretty much stoked about the Black and White Party, held to celebrate the launch of Tiger black and Tiger White.


Sometimes though, i wonder why do breweries even go through the trouble of launches. Beer drinkers are like predators, we are constantly on the hunt for the best deal when it comes to happy hour, we patiently stalk out our preys, always ready to swoop in for the kill. You don’t even have to tell us that a new product is being launched, WE KNOW a new product is being launched and we are already there before you can say “get set, go!”

Well, and as for the non-drinkers, there is not a thing you can do to convince them to take a sip. Many brave breweries have tried all tactics. First came the posters with scantily clad models, with taglines that urges you to prove your masculinity by drinking beer. Then they unleashed these scantily clad models in flesh, serving you beer in pubs. Lastly, to capture a wider audience, they also have beer aunties to serve you at the coffee shops. But for the non-drinkers, no means no, don’t want means don’t want. They are not going to budge.

TLDR: Those who want to drink Tiger black/Tiger White have already tried it, those who don’t want to, no amount of launch party can convince them to. 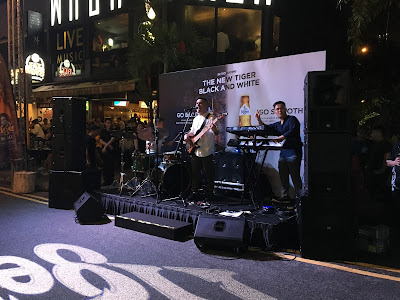 Now when it comes to product launches, I’m no marketing expert, but I think we all can agree that in life, timing is everything. One can only wonder if the timing of this is a coincidence or is it a cheeky jab at current social issues. Last year, racial issues were a huge topic in the world as Donald Trump ran an unexpectedly successful presidential campaign. Closer to home, the decision to reserve the next presidential elections for the Malay race has sparked quite the discussion about meritocracy and multiculturalism. And then we have Tiger, cheekily telling us to choose between black and white. Hmm…

Moving on from the social commentary, Tiger has really pulled out all the stops to drum up interest for this launch. I was expecting a little dinner and drinks at Baden Restaurant along Lorong Mambong at Holland Village. But when I was there, I was gobsmacked to find that they had transformed Holland V into a Street Party. With carnival like atmosphere and free flow drinks, it has all the makings of a good night. 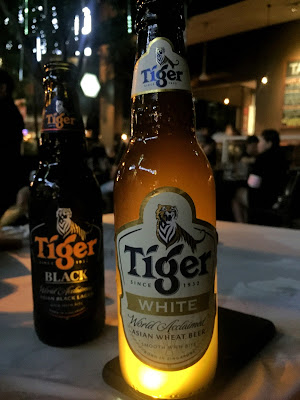 Tiger Black was slightly underwhelming. Brewed with black rice, somehow Tiger took their normal lager up another level yet not far enough to blow me away. Don’t get me wrong, it is a pretty decent beer. In fact, I prefer it over the white. However if I think about all the reasons why I would get a dark beer in the first place, I think about all the taste profiles that i associate with dark beer, and Tiger black under delivers.  I was expecting rich, creamy, nutty, chocolaty, bold, strong, full bodied. Tiger Black however delivers a much subtler punch.

The Tiger White is our local version of Hoegaarden. I am no connoisseur, and I will admit that if u place the Tiger White beside the Hoegaarden in a blind taste test, I would not be able to differentiate between the 2. Brewed with wheat, it has a citrusy note with an aroma from spices. It is on the sweet side, on a  scale of 0-10, I would place this as an 8. It is easy to drink and from what I can tell on Friday, a hit with the ladies.

Would I drink these again? Yeah for sure!

Do I love it? Some over expectations on my part but these do not taste bad and is an upgrade on the normal lager.

Perhaps we should learn from the late king of pop, if you’re drinking an ice cold Tiger, it don’t matter if its black or white.
Posted by Unknown at 5:03 PM