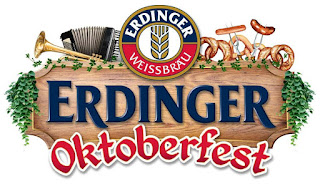 We have once again come to the part of the year where beer is the highlight. Yes it's Oktoberfest and its quite a relief if you can't fly over to Munich's Theresenwiese, we have one that is close to home. Though not as big scale, it definitely has the mood! 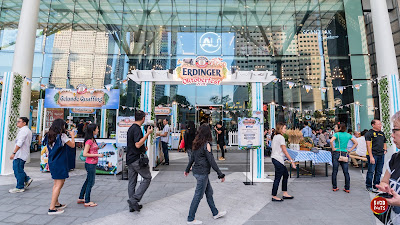 For the FIRST time, Erdinger Oktoberfest will be held over 3 major shopping centres in Singapore! Not only do they try to replicate the feeling of being in the actual Oktoberfest, the beer, food, music, costumes are all in place. 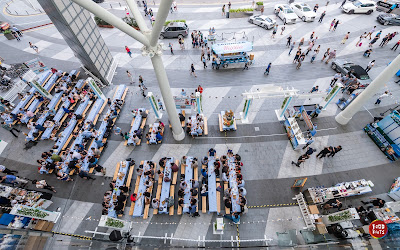 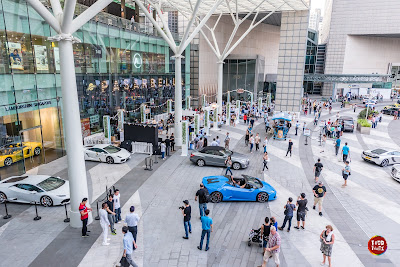 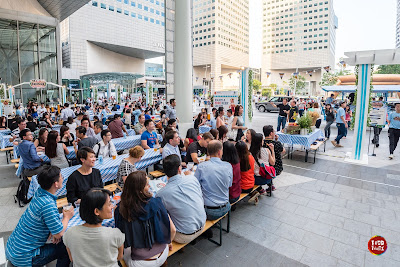 Now the main thing of Oktoberfest is the beer. 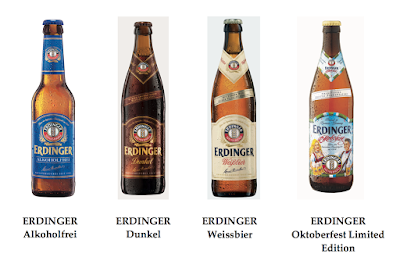 For the virgin beer (or even alchohol drinkers!) Alkoholfrei simply means "free of alchohol".
Some translation
Dunkel - "dark" - Dark beer
Weissbier - "Wheat or commonly known as White beer"
The first three from left to right is what you commonly get in the supermarkets and over the counters.
Highlight of the Oktoberfest is always the Oktoberfest Limited Edition beer.
The Oktobefest beer was quite light bodied, medium carbonation and fruity; pale golden amber and had a short finish with medium creamy off-white foam head to the beer. Surprisingly short but it goes really well to cut into the saltiness and the high-fats of typical beer food. Other than on the grounds, you can find this in the supermarkets at limited stock. Ladies, we are sure you will like it!
And did you also know that Erdinger is bottle-fermented, like champagne, where the beer matures in the bottle instead of the fermentation tank. Bottle-fermentation gives Erdinger its distinct fresh malty taste. 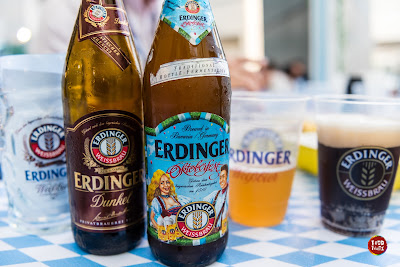 Erdinger has also made arrangements for food from Pasarbella, Indochine, Balaclava. 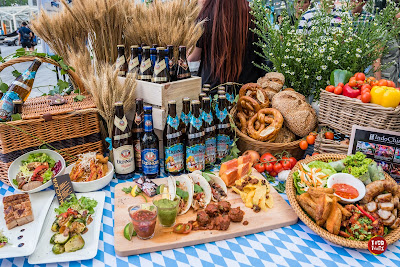 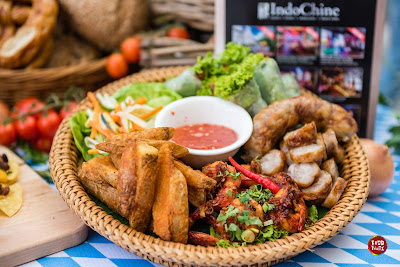 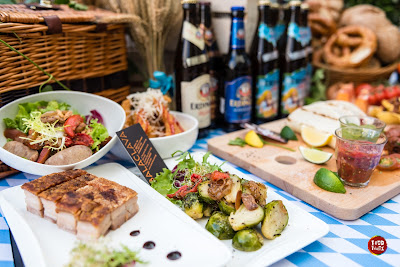 We recommend that you have the roasted pork belly and the chicken wings together with the beer! 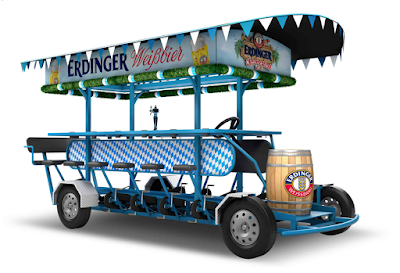 Besides drawing shoppers to Oktoberfest, Erdinger is also making a concerted effort to bring the festival to the masses by introducing Singapore’s first-­ever Erdinger BARcycle!
A mobile counter-­top bar that brings the party right to where one’s at, the Erdinger BARcycle is equipped with a beer dispenser that offers complimentary tasting portions of all four varieties of Erdinger beer. The one-­of-its-kind mobile bar will be quite literally a moving experience, as it travels along a designated route, picking up party-­goers along the way*. The Erdinger BARcycle sits a maximum of 15 persons and is complimentary to public who meets the legal drinking requirements. *you can log on to www.erdingeroktoberfest.com.sg for more details on BARcycle routes and locations. 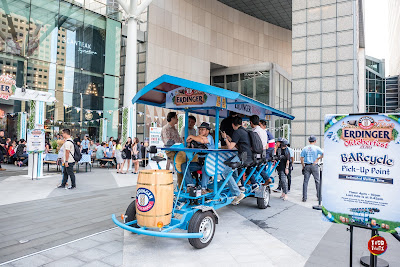 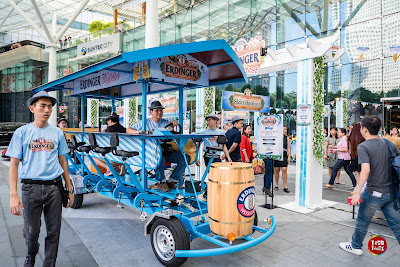 Games are also available. Be you or your friends be happy from the hoppy beers, or be plain happy about everything, these games are bound to entertain! See which of you can hold the mugs of beers the longest or hit the hardest! 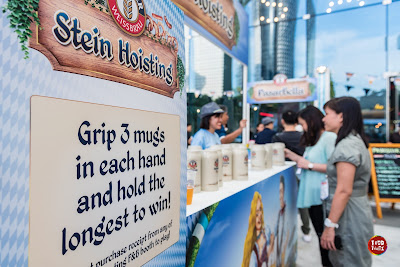 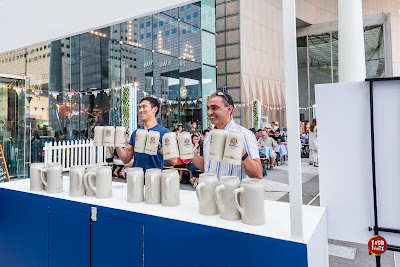 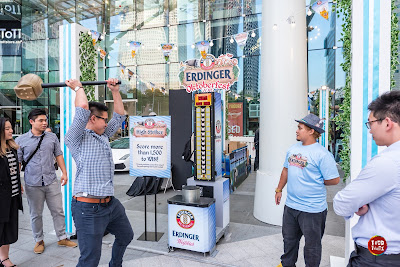 Erdinger will also be collaborating with bars and pubs across Singapore in fringe Oktoberfest celebrations, offering promotional prices on specialty brews. Do look out for these promotions or ask the bartenders at bars which serve Erdinger!
Details of Erdinger Oktoberfest 2016
21st Sept to 2nd Oct
Suntec City, Suntec Plaza, 3 Temasek Boulevard.
3rd Oct to 11th Oct
Clarke Quay Central, 6 Eu Tong Seng Street.
19th Oct to 28th Oct
The Star Vista, B1 Star Plaza, 1 Vista Exchange Green.
You may log on to www.erdingeroktoberfest.com.sg for more information.
About Erdinger Weissbräu – a traditional world-famous brewery
A rich heritage of brewing tradition combined with an innovative production process marks a key cornerstone of Erdinger Weissbräu, one of the largest German private breweries. Founded in 1886 by Johann Kienle, Erdinger is based in Erding, a picturesque town near Munich in the heart of Bavaria, Germany. The company, which got its name in 1949 after it was acquired by Franz Bromach, remains a family-owned enterprise currently helmed by Franz’s son, Werner Bromach. Today, Erdinger stands out as a clear market leader in the German Weissbier market with a production of more than 1.7 million hl and a retail network stretching over 90 countries worldwide. Connoissuers of beer worldwide have come to regard the name Erdinger Weissbräu as a hallmark of quality and fine taste. It is focused solely on brewing Weissbier, a Bavarian specialty, of which there are seven successful varieties – Weissbier with fine yeast, Weissbier Kristall, Weissbier Dunkel, Weissbier Alkoholfrei, Weissbier Pikantus, Erdinger Champ and Erdinger Weissbier in cans.

Originating from Erding in Bavaria, the name Erdinger has stood for genuine and uncompromising enjoyment for over 120 years. Brewed in high-tech facilities using only the best natural ingredients, every bottle of the world’s most popular wheat beer is brewed and filled at the original brewery in Erding under strict quality control, before being sent to over 70 countries worldwide.

Not in the mood yet? Below is the video from the Munich Tourism to highlight 2016 Oktoberfest's opening day!