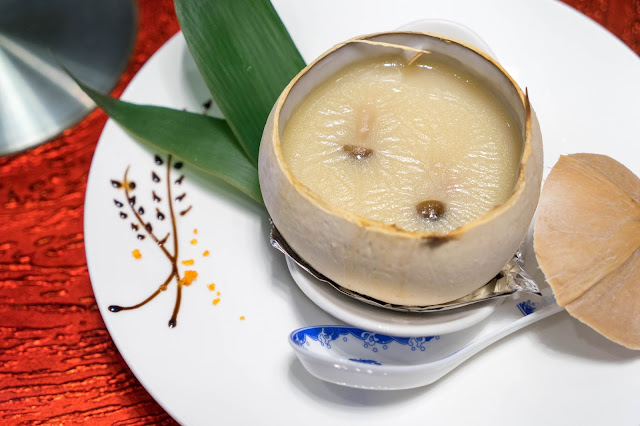 This month, Taste Paradise by the Paradise Group introduces new menu items to its well-regarded retinue of Chinese dishes and the Food Prints crew was there to enjoy it. 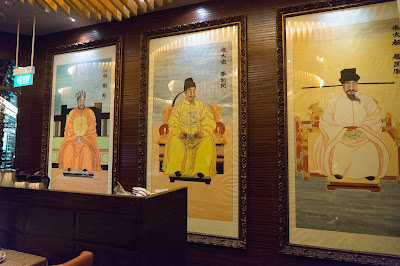 Located at ION Orchard, Taste Paradise’s decor is is a mix of modernity with visual nods to classic Chinese aesthetics. Walls are adorned with depictions of China’s most prolific emperors, including Tang Taizong and Kangxi. In the main dining area, a modern interpretation of a dragon snakes across the ceiling and down a pillar. Private rooms (seats 16 to 30 people) are also named after Chinese monarchs like Qin Shi Huang and Yong Zheng, adding to the regal atmosphere of the Chinese fine dining establishment. 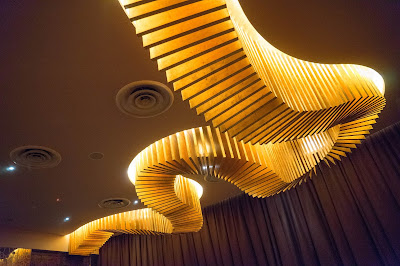 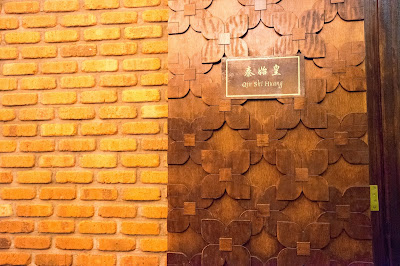 We started the meal with a single slice of smoked duck appetizer where the saltiness of the smoke duck was balanced out with the sweetness of a lemony-mango sauce. With our taste buds refreshingly awakened, we moved on to the first course of dim sum favourites including White Carrot Cake, Roast Meat and Char Siew BBQ Pork.

The XO Carrot Cake was pan fried with salted fish and XO sauce and garnished with sprouts. Its crisp exterior breaks away to reveal an interior that at once held firm and yet was fluffy, perfectly mixed with the crunchiness of the sprouts. This ordinarily humble dish was well executed with multiple layers of textures and tastes. 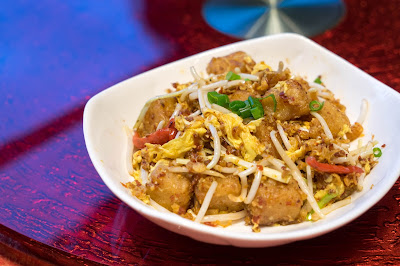 The Char Siew BBQ Pork was sliced thicker than usual, each bite a substantial mouthful of delicious morsels of fat. Its roasted counterpart, the sio bak (Roast Pork), had a perfectly crisp crackling. We would have certainly ordered another portion had we not wanted to save stomach space for the main attractions. 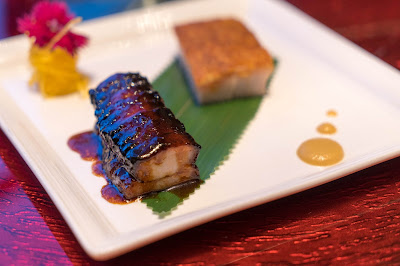 As part of the August menu refresh, Taste Paradise introduces the Shark’s Cartilage Soup with Assorted Seafood in Young Coconut. The creamy white consistency of the soup is derived entirely from slowly boiling the shark cartilage for 6 hours and no milk is used to achieve this effect. Together with fresh scallops, prawns and sliced fish, the soup is served in a hollowed out young coconut which lends its characteristic, mildly sweet, flavour to the broth. 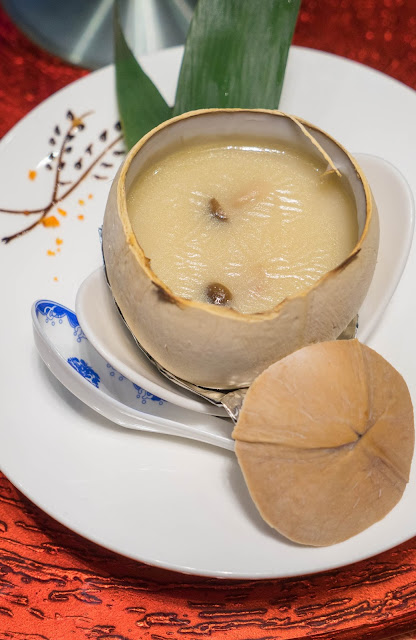 A visit to Taste Paradise warrants tasting its signature dishes, such as the Superior Shark’s Fin in Supreme Broth served with Crispy Spring Roll in Japanese Stone Pot. It proved to be a mouthful both in name and in taste. Taste Paradise is the first restaurant in Singapore to serve shark fin in a Japanese style stone pot which helps retain the temperature of the dish to the very last drop. 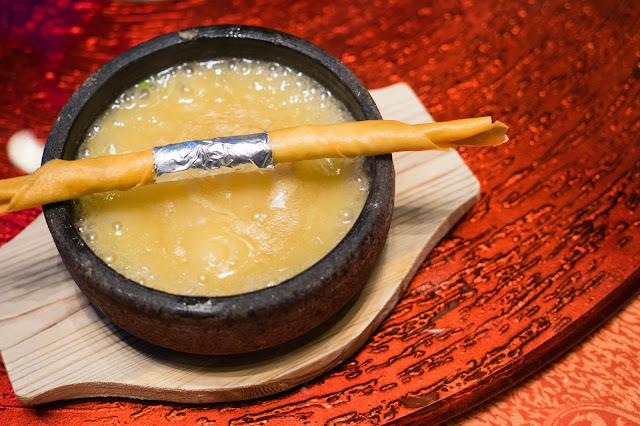 Each serving is accompanied by a thinly rolled crispy spring roll which you dip into the thick broth. The chef strongly discourages adding any vinegar or pepper (as is the usual practice) as the flavors of the dish have been carefully curated to be ideal on their own. The soup is thickened into a satiating gooey consistency through the use of Chinese ham and kampong chicken which adds a collagen-richness.


Different grades of shark’s fins are available and the dish starts at $45 for a 2-person serving. If you prefer, mock-shark fin alternatives are also available.


Another new entrant to the pageantry that is Taste Paradise’s menu was the Pan-seared Kurobuta Pork with Dang Gui (当归 ) Sauce in Casserole. Tender cuts of Kurobuta Pork sourced from Italy were served with a sauce made from Chinese Angelica Root (a herb known for its immunity boosting properties) and garnished with red and green peppers. The herbal taste was mild so it did not take away from the sweetness of the dish. 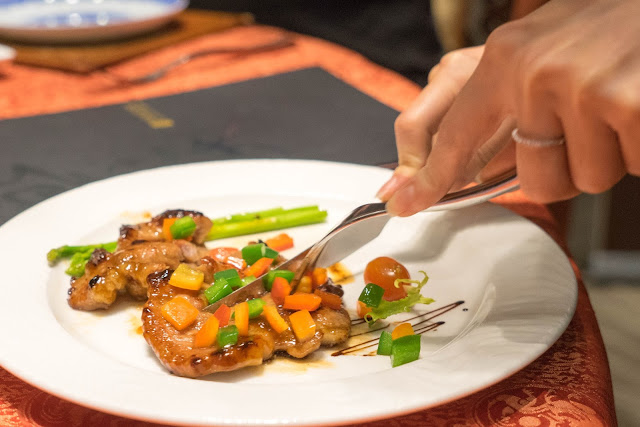 Next in this porcine course was the Char-grilled Spare Ribs with Sweet Plum Sauce. An existing signature dish, the ribs were nicely crispy on the edge, surrounding soft cartilaginous bones, and lovingly dressed with a fragrant plum sauce. 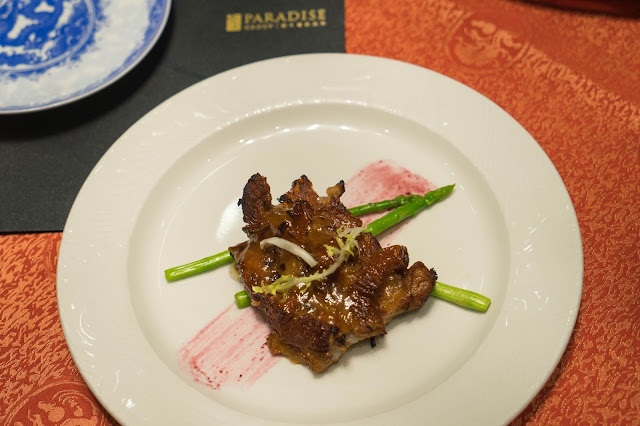 Taste Paradise is known for putting twists on traditional Chinese dishes by infusing non-traditional Western tastes and ingredients into their creations without becoming kitschy “fusion cuisine”.


To keep things fresh, regular customers in-the-know may also request off-the-menu items like the Pan Seared Codfish with White Truffle oil and Scrambled Eggs. Eggs are scrambled with truffle oil into a thick creamy curd-like texture that accompanied the firm flakes of cod fish with a burnt caramelized sweetness and speckled with fish roe. 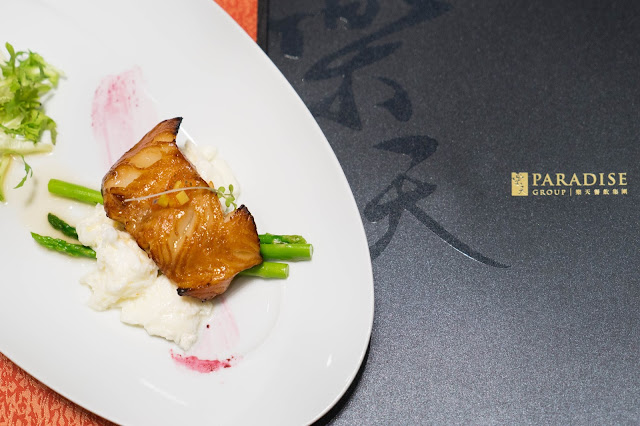 No Cantonese restaurant is complete without a star fish dish and here we found the newly introduced Steamed Empurau with Chinese Wine (specifically Gu Yue Long Shan Yellow Wine, which the Paradise Group’s CEO, Eldwin Chua, personally selects and hand carries from Shanghai). The Emperau is a prized fish known for its smooth flesh and natural sweetness, imparted from its diet of palm fruits. Together with its salty-sweet sauce, distilled from high quality yellow wine, the Empurau makes for a distinctive dish which warrants placing an order in advanced. Make sure you secure one for your dinner party ahead of time. Unfortunately we were late to the game but were content to try the same dish substituted with cod instead. 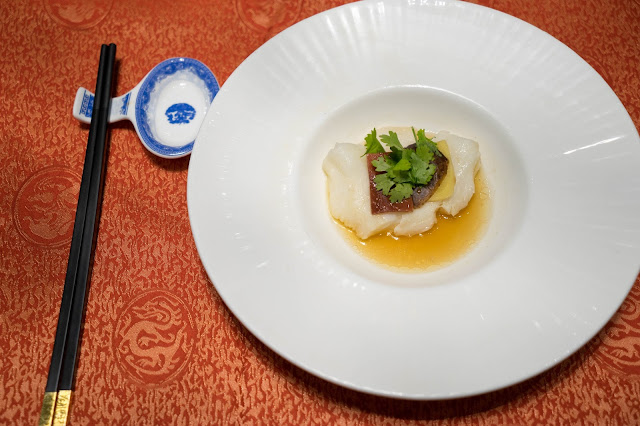 Rounding off the seafood selection was the Poached Rice with Assorted Seafood in Lobster Broth. Whole lobsters are slowly cooked in a broth for 4 hours, to which prawns and scallops are then added to give you a warm and comforting dish. Crispy rice pops are then added to the piping hot dish, their crackling sounds serving as an invitation for you to dig in. 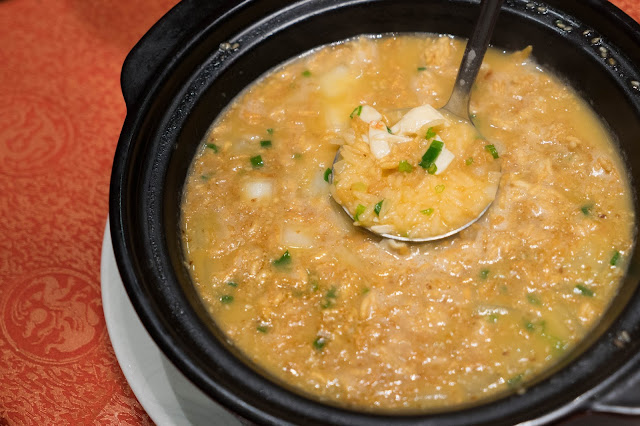 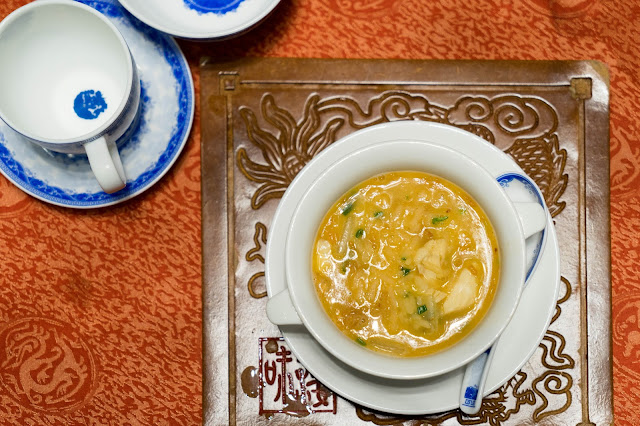 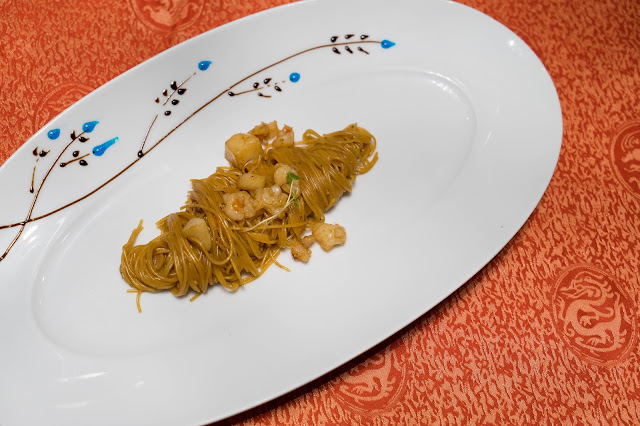 Despite the veritable feast, there’s always space for dessert, of which the choices were 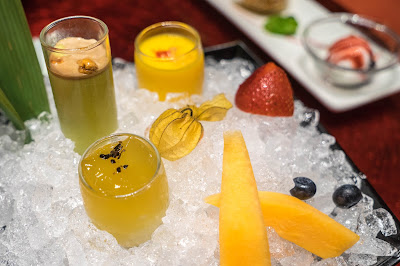 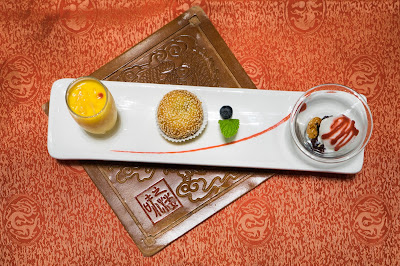 We liked the Pumpkin Pastry with Red Bean Paste. It was old-school and fit with the collective calm we all felt after the sumptuous meal.


The meal was served with Nuo Mi Tuo 糯米佗 tea that was also personally chosen and hand carried by the Paradise group's chief, from China. The tea held a subtle fragrance and mild sweetness characteristic of Nuo Mi or glutinous rice, hence the name; and purportedly neutralizes oily food, aids fat reduction and calms anxiety. 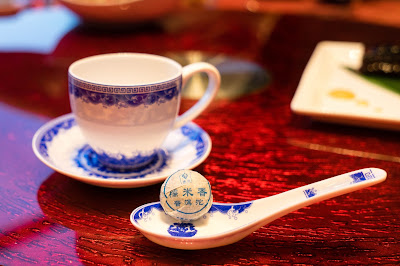 The new menu items are now available, so make your way down to this fine establishment that has been serving quality dishes since 2006, and experience it for yourself. If the pictures of Emperors do not make you feel like one, the exceptional service and painstakingly prepared dishes served on custom made dinnerware will. 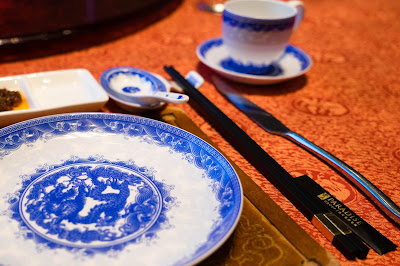