Mr Pancakes was unable to attend the OC Foodies Invitation so Mrs Pancakes and her sister went, and had a great afternoon of catching up at Sarang. 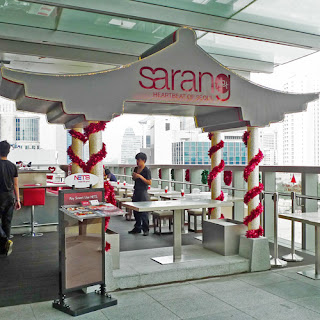 We were greeted with a cup of Maesil cha, a homemade plum tea, which was a refreshing drink, with a hint of sour plum, to ready your palette for the dishes to come.

The afternoon started with a food photography workshop held by Dr Leslie Tay, of ieatishootipost. As Mr Pancakes is usually the one taking the photos, Mrs Pancakes picked up many tips from Dr Leslie Tay during the workshop: how lighting, composition and depth of field can affect the look of food, and the one third rule.

And now for the food:

The dishes had very interesting names like DJ Rice, Rooster Booster, Angry Piggy. They serve cocktails as well but we did not have a taste of them. 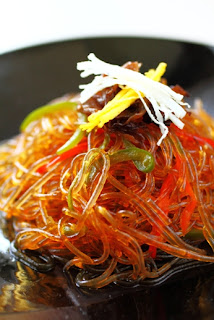 Next up was Sarang's signature freshly tossed Kimchi. The cabbage was crunchy but was a tad too spicy for our palates. 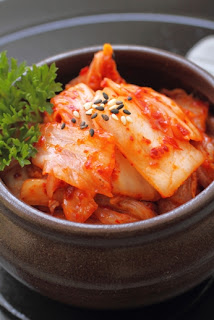 The first main that we tried was the Drunken pork - Grilled, wine-marinated pork belly served with kimchi on a sizzling hot plate. Heard from one of the servers that the pork belly was marinated in red wine for 2 days before it is cooked. One of my favourites for the day, the pork was juicy, with a hint of red wine. Lovely! 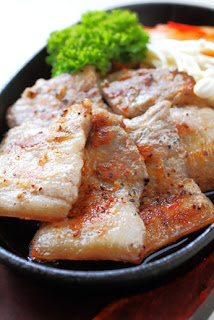 The next main we tasted was the Sun and moon, Kimchi fried rice with a sunny side up. Flavourful, with the frangrant taste of the Kimchi seasoning with every mouthful. Mrs Pancakes' sister describes it as seasoning wrapped around every grain of rice. :) 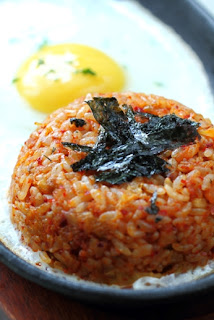 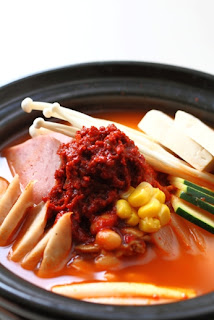 One dish worth mentioning, is the Godmother, 300gm grilled beef steak marinated in chef’s special fruit sauce. Mrs Pancakes does not eat beef, but her sister was wowed by the beef, full of flavours, thoroughly cooked, but the meat still tender and juicy. Yum! 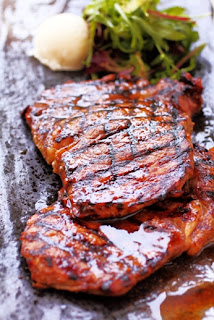 Next up, Ginseng porridge, another Chef’s signature dish. Korean ginseng and chicken porridge, the taste of Ginseng was not overpowering, the porridge was tasty, but flavours not too strong. Good for someone who is looking for a light meal. 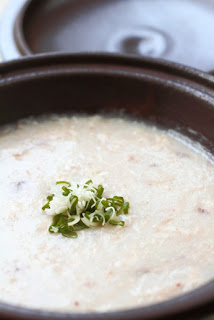 Lastly, we had dessert! Pappa pancakes. If you like the taste of cinnamon, this is the dessert for you. Fried cinnamon pancakes, crispy on the outside, chewy on the inside with cinnamon sauce on top. Mrs Pancakes' sister had a second helping for this. 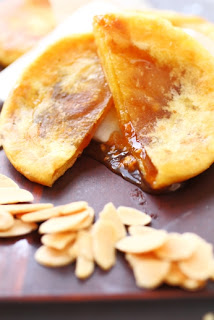 Suited for the Singaporean palate.  Good food with reasonable price, mains costing below $20 (except for the beef steaks).  Outdoor seating did not feel warm though it was in the afternoon. However, if you can't take the heat, there is always indoor seating.