"To be part of the breakthrough or progress of a fellow human being is a divine experience." And that reminds me why am I doing things that I am doing now.
Karate Kid by Jayden Smith and Jackie Chan was great. What an emotional movie. So many aspects of the movie that one can relate to. Esp in recent times.
--------------------------------------------------
The wife and I had been on a ramen （ラメン）rampage and this is one of the many to come. Somehow it is just hard to stop. Especially when you imagine the hot, creamy tonkotsu soup base with the QQ noodles. On a cool day. How wonderful is that.
Ramen shops had been mushrooming throughout the island and we had quite a few on the list to go around. And some of them with impossibly long queues, even on a weekday. We were lucky that we managed to chalk some off the list.
Ippudo had been the talk of town for a while already. But the queues are ever-long. We met a friend who works at Ippudo, whom very kindly recommended a couple of her favourite dishes to us. And we were glad that we stuck to her suggestions. :)
Japanese Cucumber with Sesame 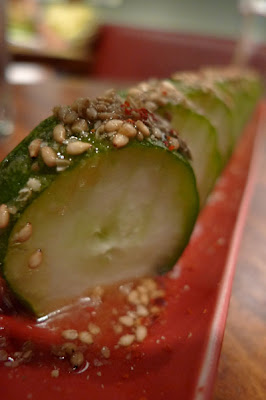 We did not expect such a long cucumber. At $6, it is a slightly expensive but very good appertiser. The cucumber was sliced length-wise, to release some of the juices and to let the sesame sauce seep through. The cuts were drizzled with sesame sauce and top with sesame seeds. The cooling cucumber and the nutty sesame seeds were a great delight. Very good start to the meal. (4/5) 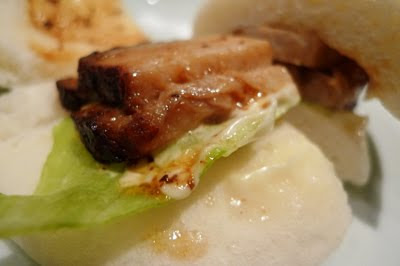 The pork bun ($3) is very similar to our dear old kong ba pao. The meat is stewed in Japanese flavourings to the extent that the meat (and fats) melts in your mouth. Simply heavenly. But we couldn't help comparing to the original kong ba pao, so it may had taken an edge off it. The very light Japanese mayo that lined the lettuce is a great compliment. (4/5)
Shiromaru Motoaji Ramen 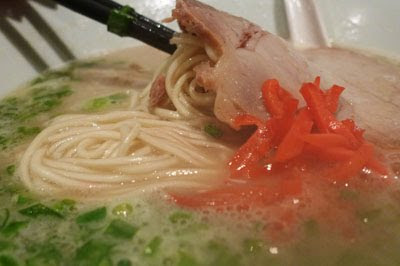 Or called the white bowl ($15), is the original tonkotsu soup served with simmered pork loin chasyu with Hakata style ramen. Thick, flavourful soup with the right combination of condiments of cabbage, kikurage and spring onion. This is rather light, relatively, in the ramen family but yet still rich enough in flavour. You can choose how well done you want the noodles to be cooked, a la beef style. We prefer the 'hard' noodles as it presents the right level of springiness for us. Has to be one of the better bowls we had. (4.25/5)
Akamaru Kasaneaji Ramen

Also known as the red bowl ($15). On top of the original tonkotsu soup, the red bowl is served with slices of simmered pork belly chasyu, original blended miso paste and compliments of garlic oil kikurage and spring onions. This combination is simply awesome. Totally blown me away. The combination of the soup and miso paste hit just the right notes without either of the taste overpowering another. You can taste the merits of both. And we are not done yet. We thought the pork bun was good until we had the pork belly chasyu. This had to be one of top simmered pork belly we ever had. Very close to the dong po rou (braised pork belly) I had as a kid in China. (5/5) We opted to add an egg ($2). Well cooked with the yolk still runny.
You can choose to add extra servings of simmered pork loin or pork belly. And yes, have an extra serving of ramen too ($2) but no top-up of soup. Very Japanese eating experience indeed. 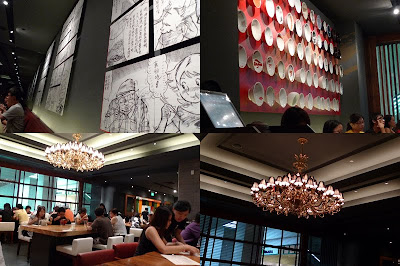 The decorations of the restaurant kept us occupied for awhile. Interesting. Be prepared to share tables as ere are a few big tables and the staff will sit you if there is space to keep the queue moving fast.
Our friend told us that they will be launching a new series of desserts later in June. So watch out for that. So exciting. 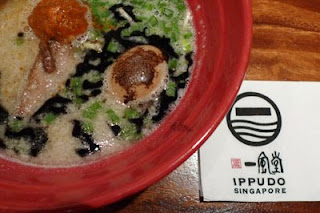