Start of the Wars

Mr Pancakes decided to start a food blog after one fine breakfast with Mrs Pancakes. Mr Pancakes do have a blog, but decided that some of the entries are for his closer friends and not to open it up to anyone to have a snip at his inner thoughts and feelings (fillings). Thus the birth of this blog.

Why "Pancakes Wars"? Well, the first entry is going to feature pancakes and we are going to compare pancakes from 2 places! Mr Pancakes also wishes to include his culinary (mis)adventures and posts the recipes he uses here. And of course, visits to places that gave him a notable gastronomic experience. 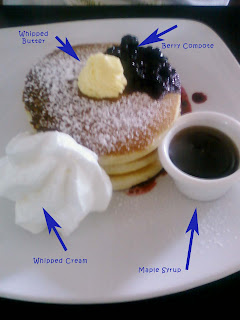 The texture of the pancakes were great. And the serving is huge. Mr Pancakes had to have a late lunch. Mr Pancakes thought the whipped butter wasn't as flavourful as he would had liked it to be. It didn't give a kick to the dish. The berry compote was alright, however, it made the base of the pancakes soggy. Not the best way to serve it if you like to eat your pancakes from top-down. The maple syrup was too thin for Mr Pancakes' liking and the whipped cream (probably from a pressurised can) turns watery after sitting for awhile. 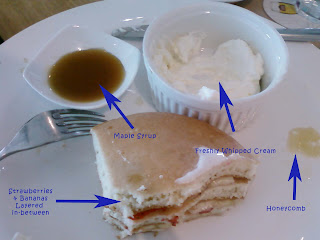 The fresh strawberries and bananas layered in between the pancakes delightfully surprised Mr Pancakes. The honeycomb added a sweet touch to the dish. The maple syrup was thick and extra-ordinary flavourful. It tasted like the traditional kind of syrup and Mr Pancakes assumed that it is not just any other brands that they picked off the shelves of supermarkets. (They may had, but it tasted like they didn't.) Another wonderful surprise was the freshly whipped cream. Taking into consideration that Mr Pancakes takes serious considerations to his fat content intake, Mr Pancakes did not try the cream until he was a quarter way through his pancakes. (He was indulging in the lethal combination of the fresh fruits, thick maple and the honeycomb.) Mr Pancakes was totally blown away. The cream tasted really fresh, it was light with a hint of sweetness. Very refreshing indeed.

Superb experience overall. Mr Pancakes had not one, but two surprises in one dish.

Prive's pancakes a definite no-horse-run to Riders' pancakes. I have to say the marina's view slightly top the rolling greens of the saddle club. Both places had good ambience and are good places to have a good weekend breakfast after a long week.

Sidenote, Mr Pancakes didn't like the smell of horses at Riders. Reminded him too much of the zoo.