Breeze at The Scarlet Hotel 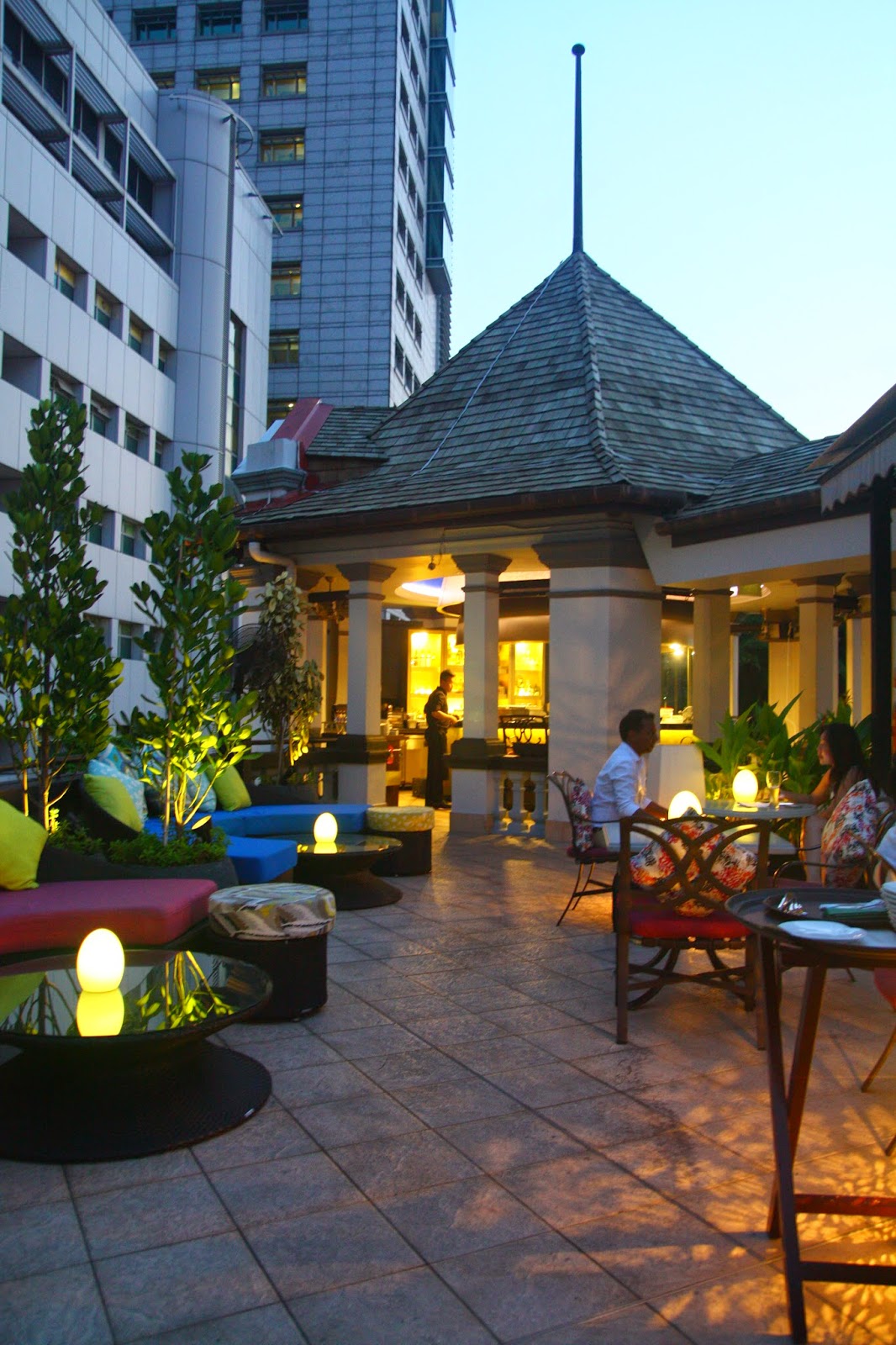 Breeze at The Scarlet Hotel offers a welcome respite from the overwhelming intensity of the CBD, and finds itself a short distance from the Maxwell market, best known for featuring a smorgasbord of famous local delights including ondeh ondeh and of course, Chicken rice.

It's location between the CBD and Chinatown is a true testimony to the juxtaposition that is Singapore- a mix mash of cultures, rows of restored shophouses dwarfed by skyscrapers, equal parts idyllic and intense. Sure much can be said of many cities in south east Asia but I suspect no where else in the region are people as food obsessed. Like Calvin Trillin of The New Yorker once wrote of locals, "Culinarily, they are among the most homesick people I have ever met." 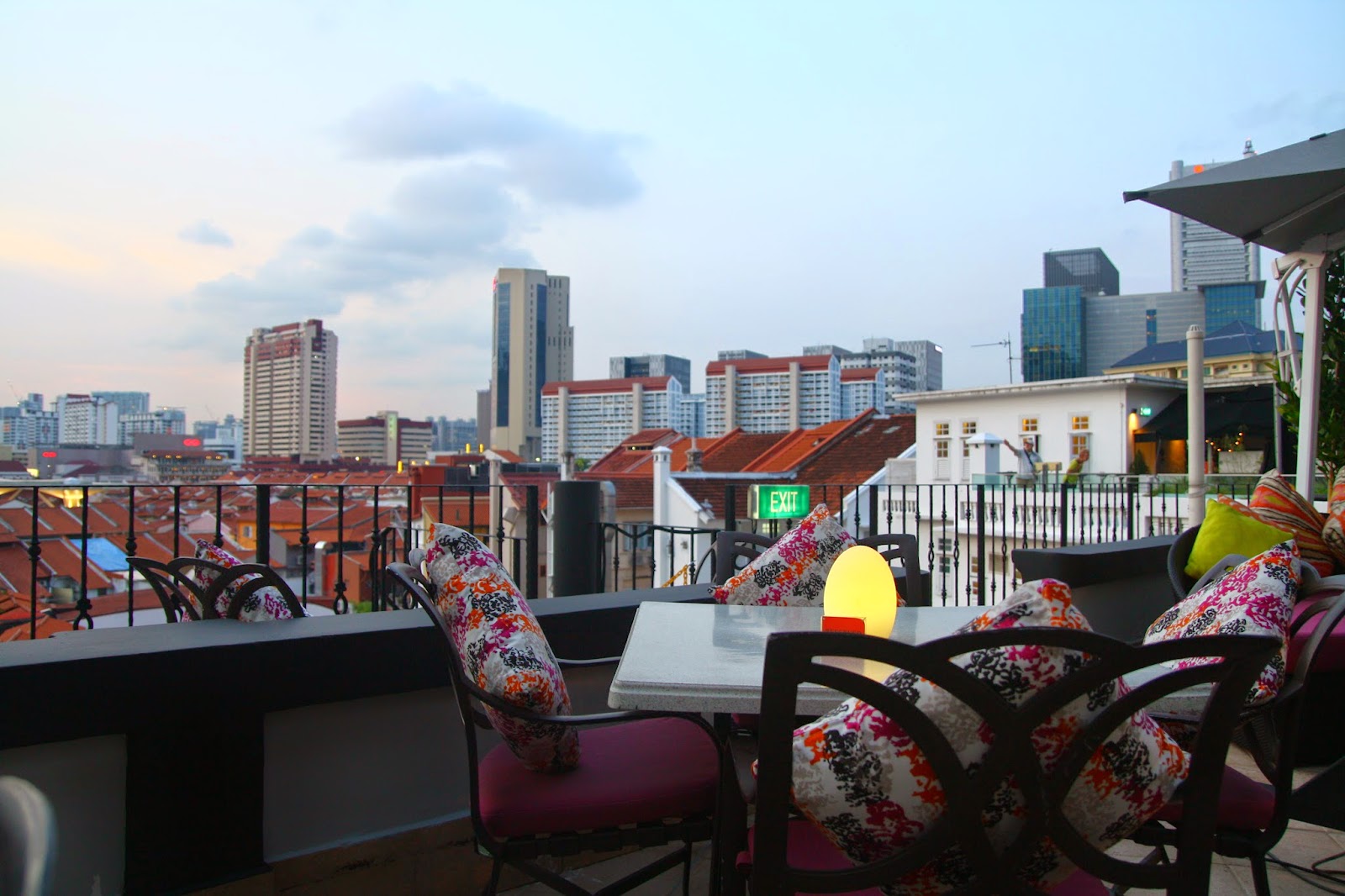 On a cool weekday evening we find ourselves at the aptly named Breeze, a rooftop bar atop The Scarlet Hotel, itself a boutique hotel built into no less than 13 old shophouses that date back to the 1800s. It is sweet relief knowing that in an era where every other hotel is competing on the basis of international Michelin chefs, a home grown brand like The Scarlet Hotel has entrusted itself to the fine handiwork of local chef Vincent Teng.

The place is highly recommended for those who tire of the usual deluge of music and mayhem along the Ann Siang stretch or if you don't wanna jostle with the increasing number of tourists at Chinatown food street, (within view  from Breeze, it's distinctive rain shelters jutting above the canopy of shophouse roofs.)

Being a bar, Breeze features a range of signature cocktails that work together with the food to accentuate the Scarlet brand personality of Cheekiness, the work of bar manager Andy.

We started the evening with a refreshing house concoction, the Graciously Scarlet. We found it full bodied in flavour but a tad on the syrupy sweet side.  Gin based with an accompaniment of raspberry and served with shaven ice, it's pretty good as a dessert, really. A welcome excuse to imbibe with your meal. It's not exactly stingy on the alcohol either. An infusion of fresh strawberry and lime makes this a welcome treat in Singapore's tepid weather. 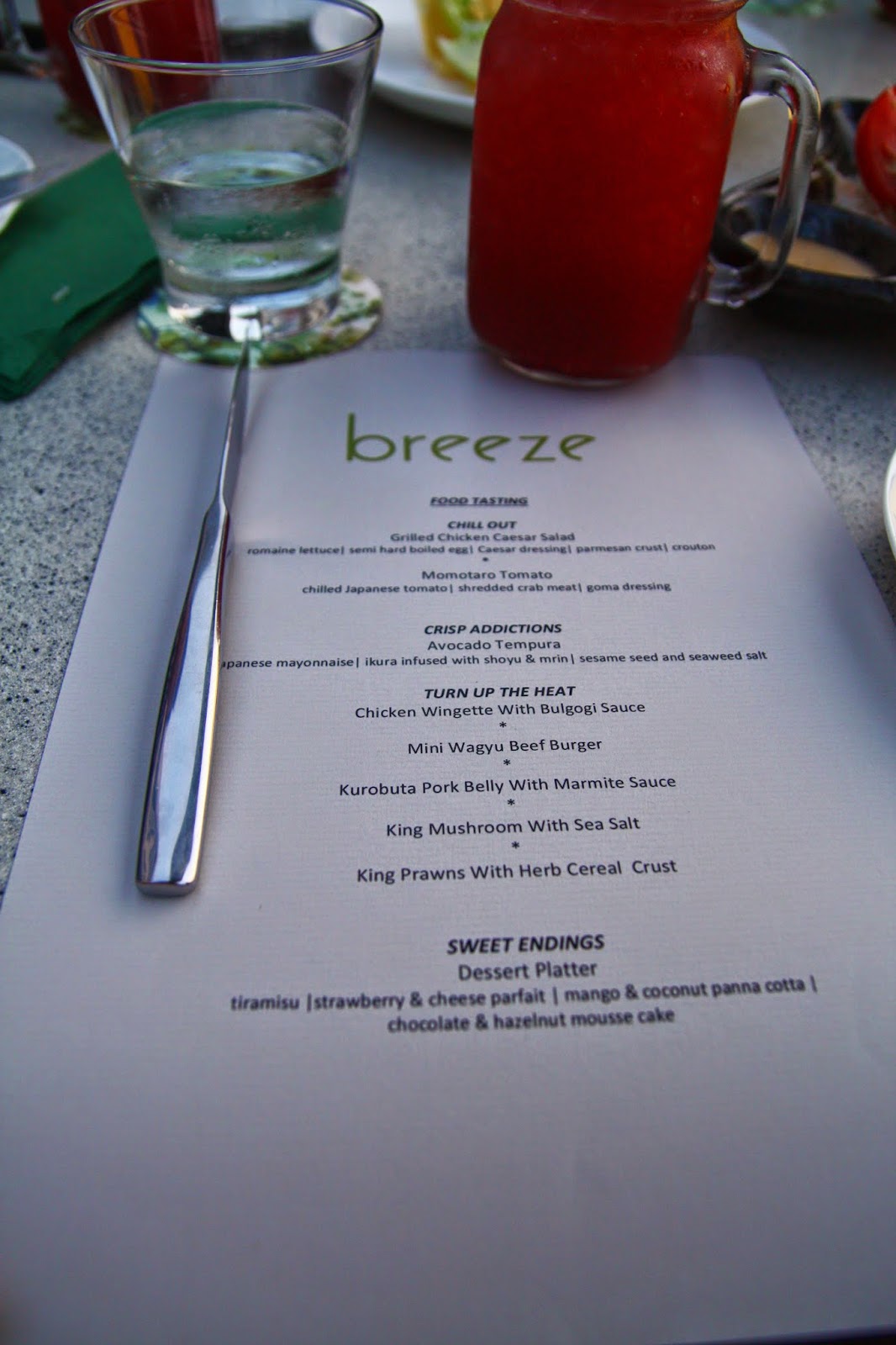 Tastings started with a humble Grilled Chicken Caesar Salad, albeit with some distinctive character of its own. Parmesan cheese is baked into the bowl, and the usual hard boiled egg is served with a still-liquid centre yolk, Ramen style. And since this was a salad where even the bowl was edible, runny egg and all, i had braced myself for a soggy affair but found the Parmean crust to be crisp and the runny yolk a nice addition to the caesar dressing.

The second dish was our favourite. Fresh crab meat served on momotaro tomatoes from Japan. Naturally sweeter than your usual garden variety tomatoes, the momotaro went well with the mellow brininess of the fresh (read: non-canned) shredded crab. 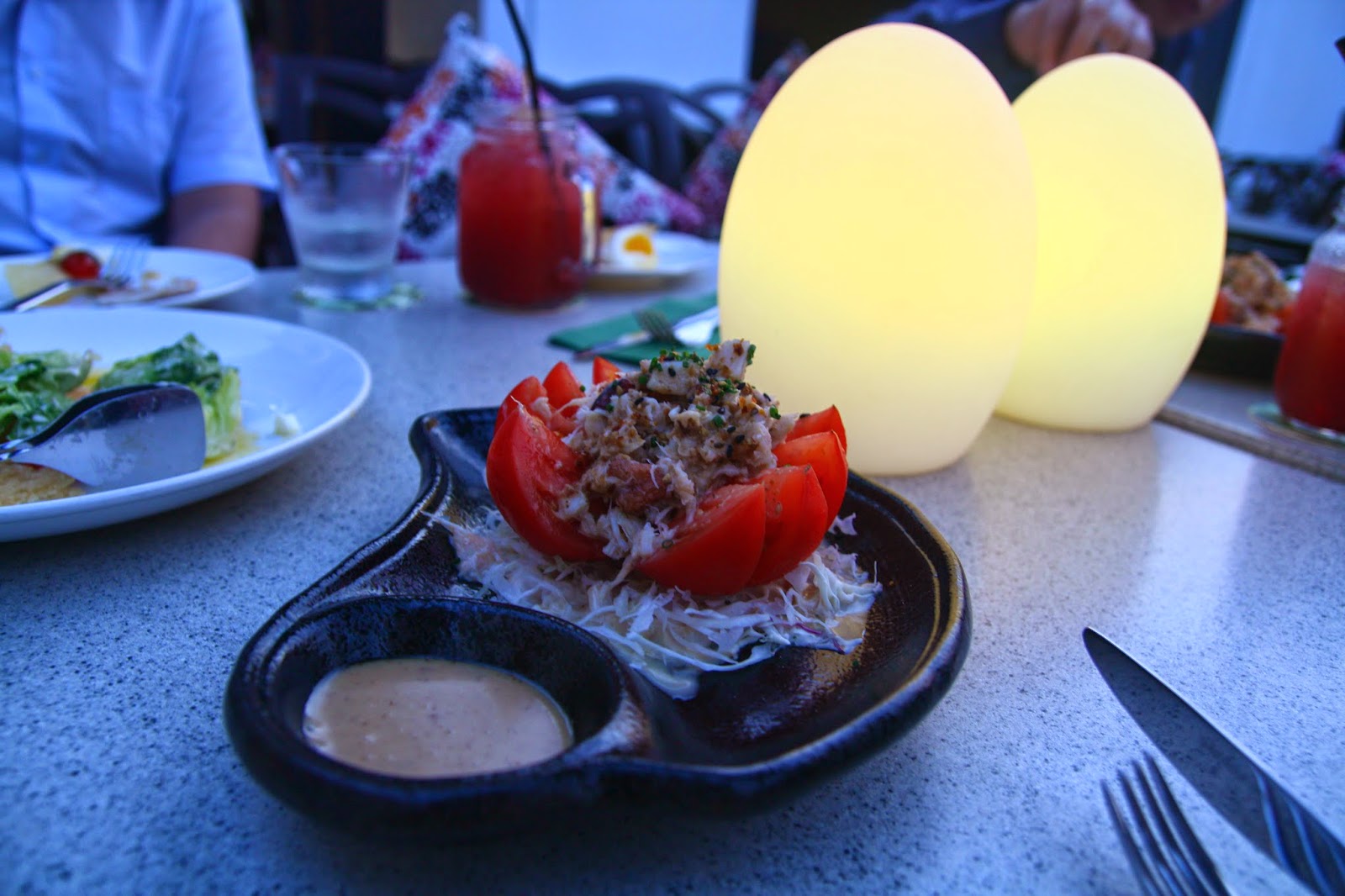 The Avocado Tempura that came next was a labor of love. The flesh is removed, cubed, seasoned with sesame salt, replaced into the avocado shell and the whole thing is given a tempura treatment. Infused with mirin and topped with roe, it tasted almost croquette like, crisp bits crumbling away at a touch of the fork with the avocado flesh softened without being mushy. 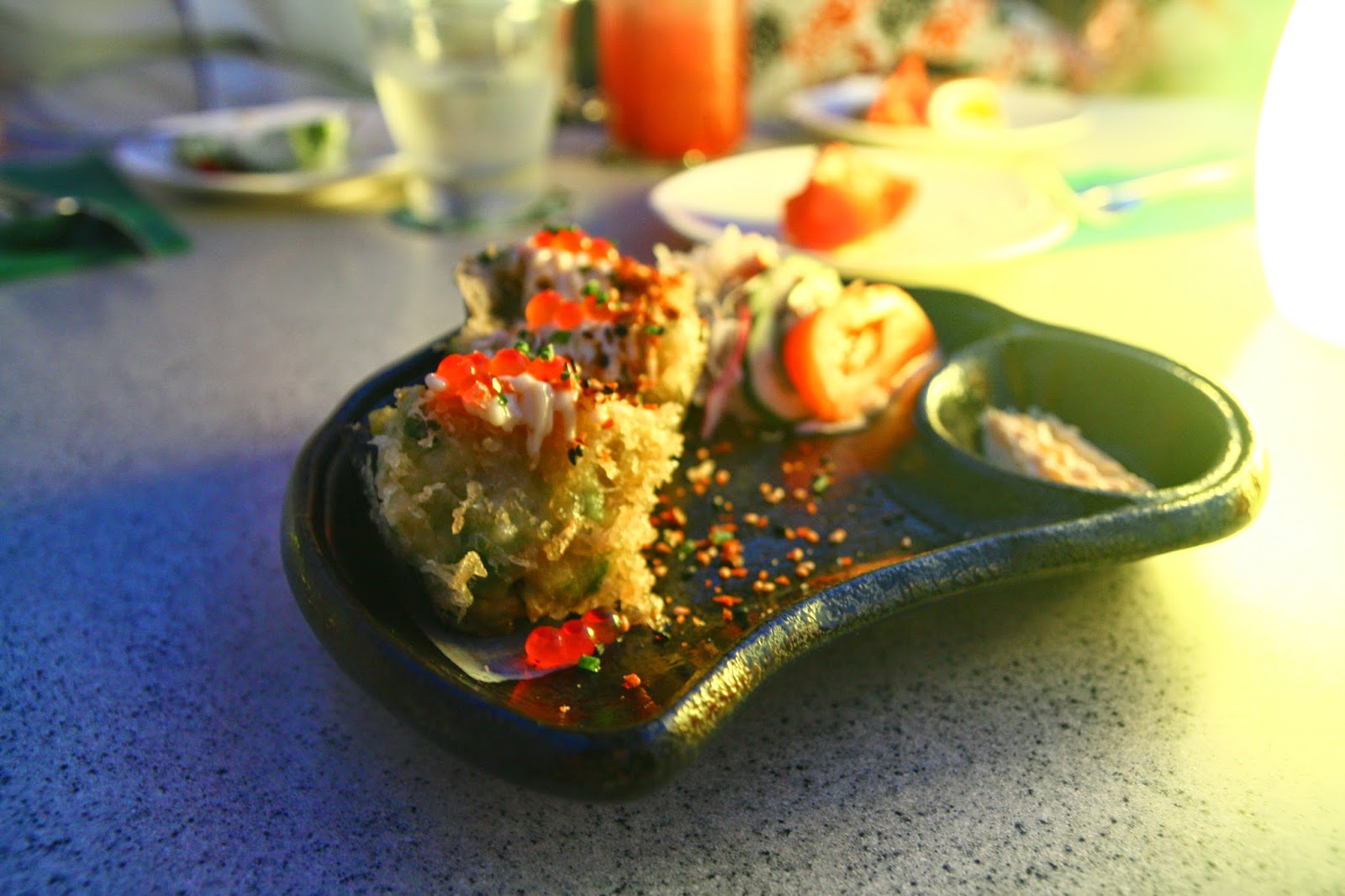 We started noticing a subtle nod to Japanese influence, from cooking methods to ingredients used, and our suspicions were confirmed with the yakitori style Chicken Wingettes with Bulgogi Sauce that are charcoal grilled instead of deep fried as Korean convention dictates. So simple, it makes u wanna try the same thing at home, only to realize it takes more than just the right ingredients to pull off a simple dish. 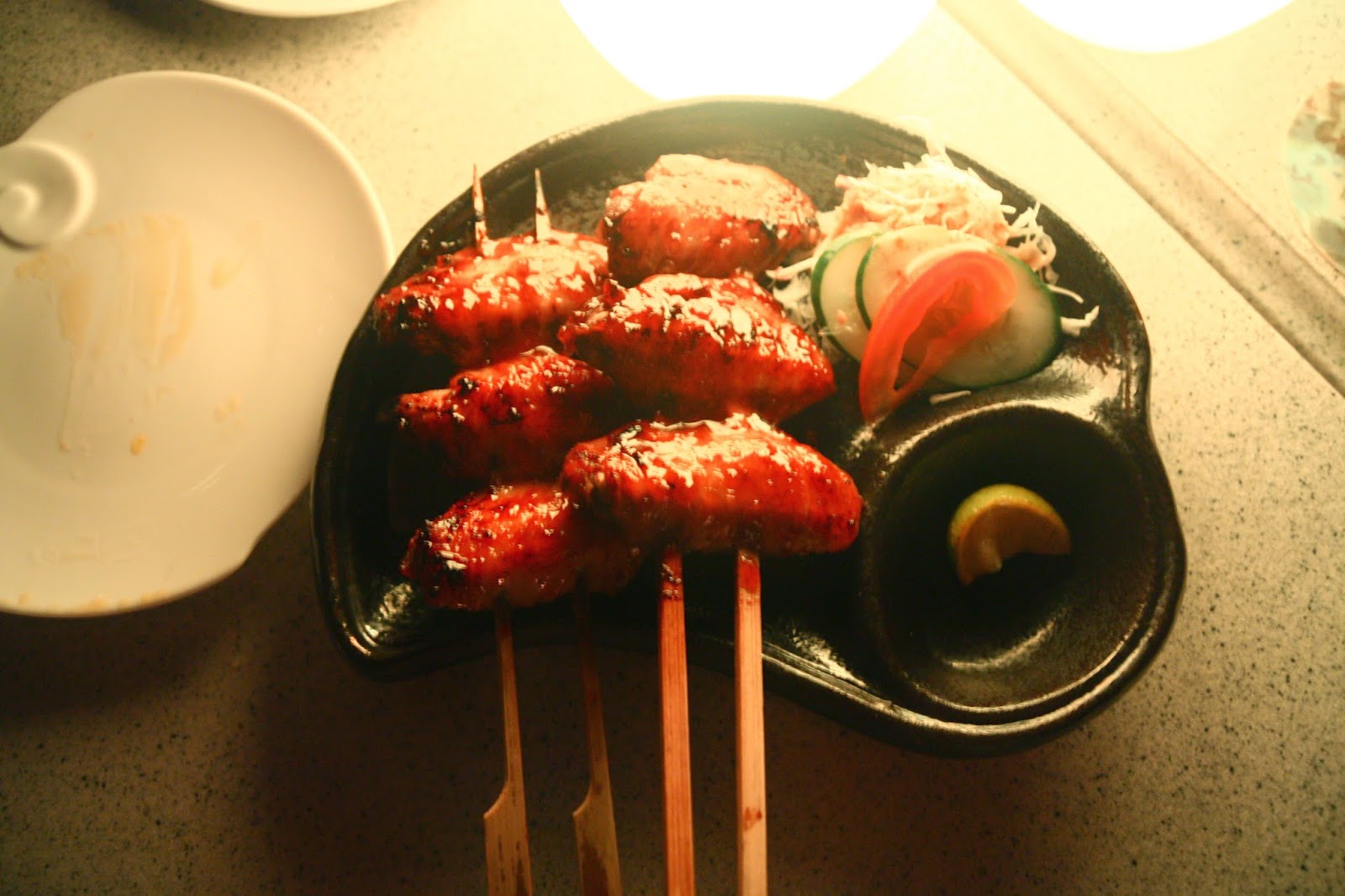 A crowd favourite, the Mini Wagyu Burgers, came with buns that are handmade from scratch. Chef Vincent alludes to childhood memories of compressing whole burgers into a single mouthfuls and encourages us to experiment likewise. I wisely chose not to, good thing too, because that wouldn't have done justice to the juicy patties and natural sweetness of the handmade buns. No ketchup required. We liked the slivers of crisp cucumber, a subtle complement to the notes of lettuce. 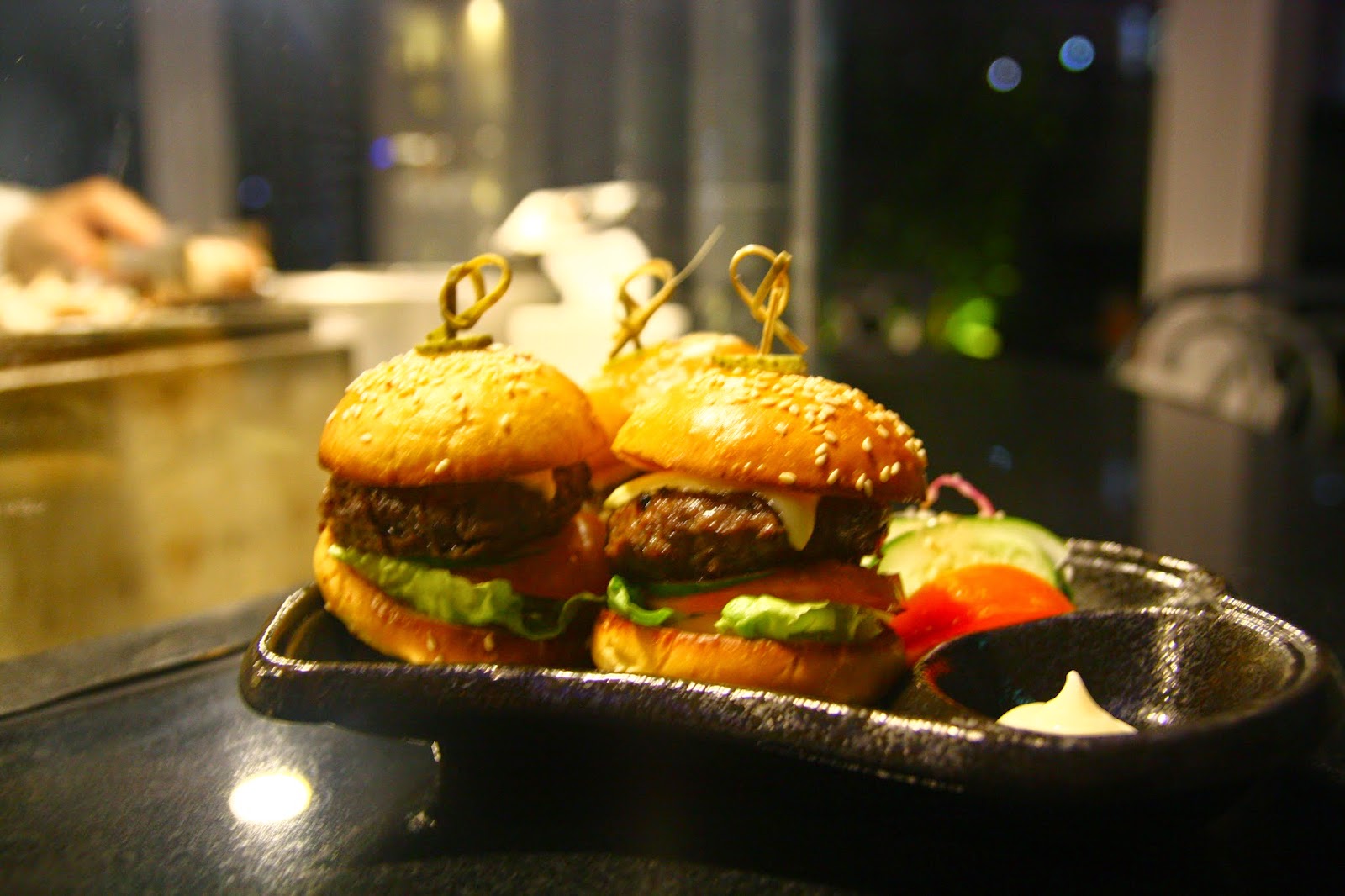 The Kurobuta Pork Belly with Marmite Sauce came paired with the Grilled Mushrooms and Sea Salt. The pork belly proper is treated with glucose water, a process that Chef Vincent explains, prevents the Marmite from burning. The grilled king mushrooms with sea salt taken right after almost serve the role of a digestif (though you're truly prefers Jagermeister in that role). Despite such a saccharine strong suite of flavourings, it didn't taste as sweet as you would expect. Admittedly, we wish it had. Still good nonetheless. 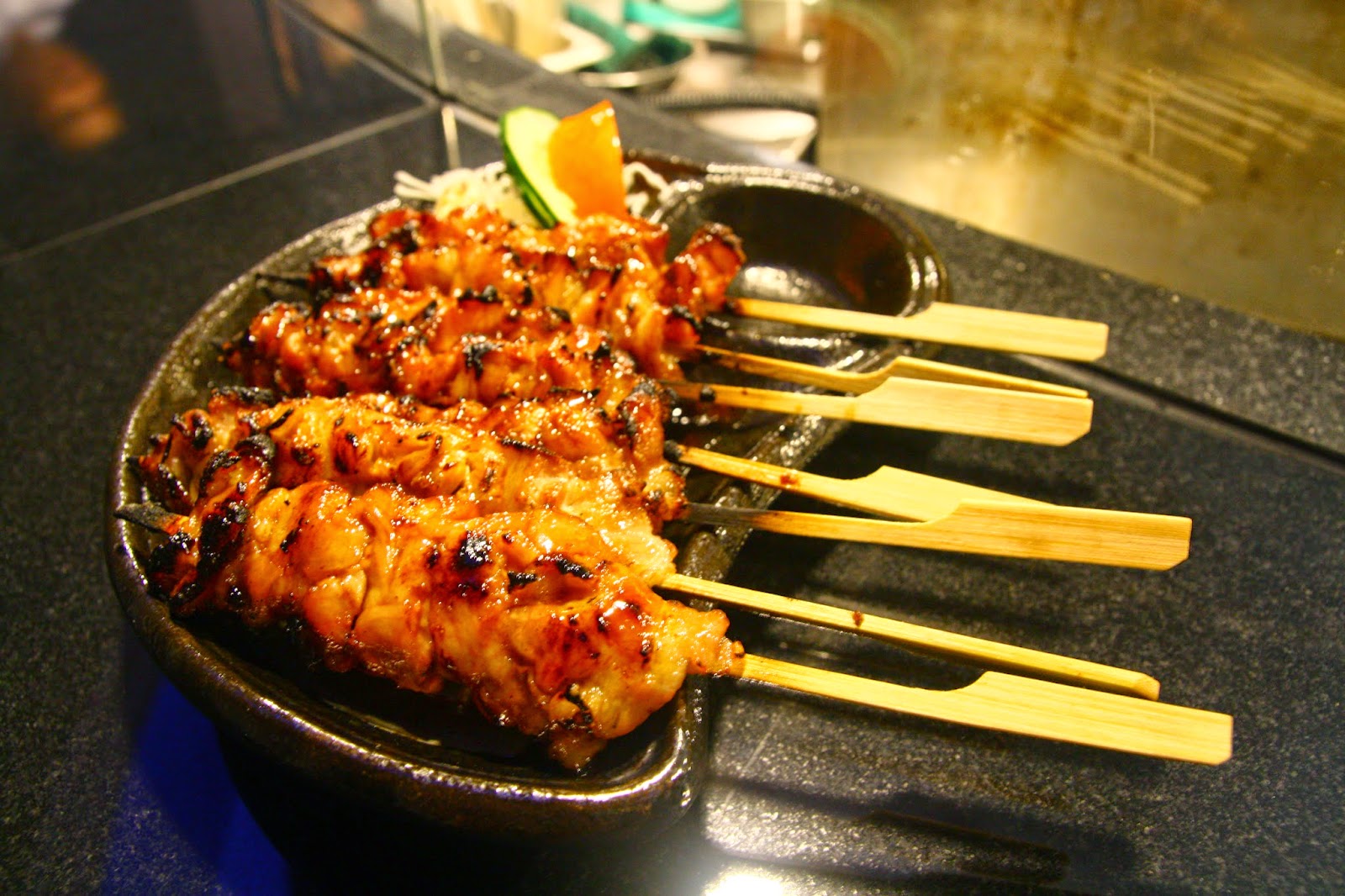 The King Prawns with Herb Cereal Crust concluded our grilled suite. This rendition of cereal prawn was not like what you'd expect from the usual Tze Char. With the cereal bits inside the prawn itself, rather than discarded along with the shells. Without being too oily, the skewered shrimps had the honeyed sweetness of the cereal crumbs and a light buttery aftertaste. My only wish is I had more. 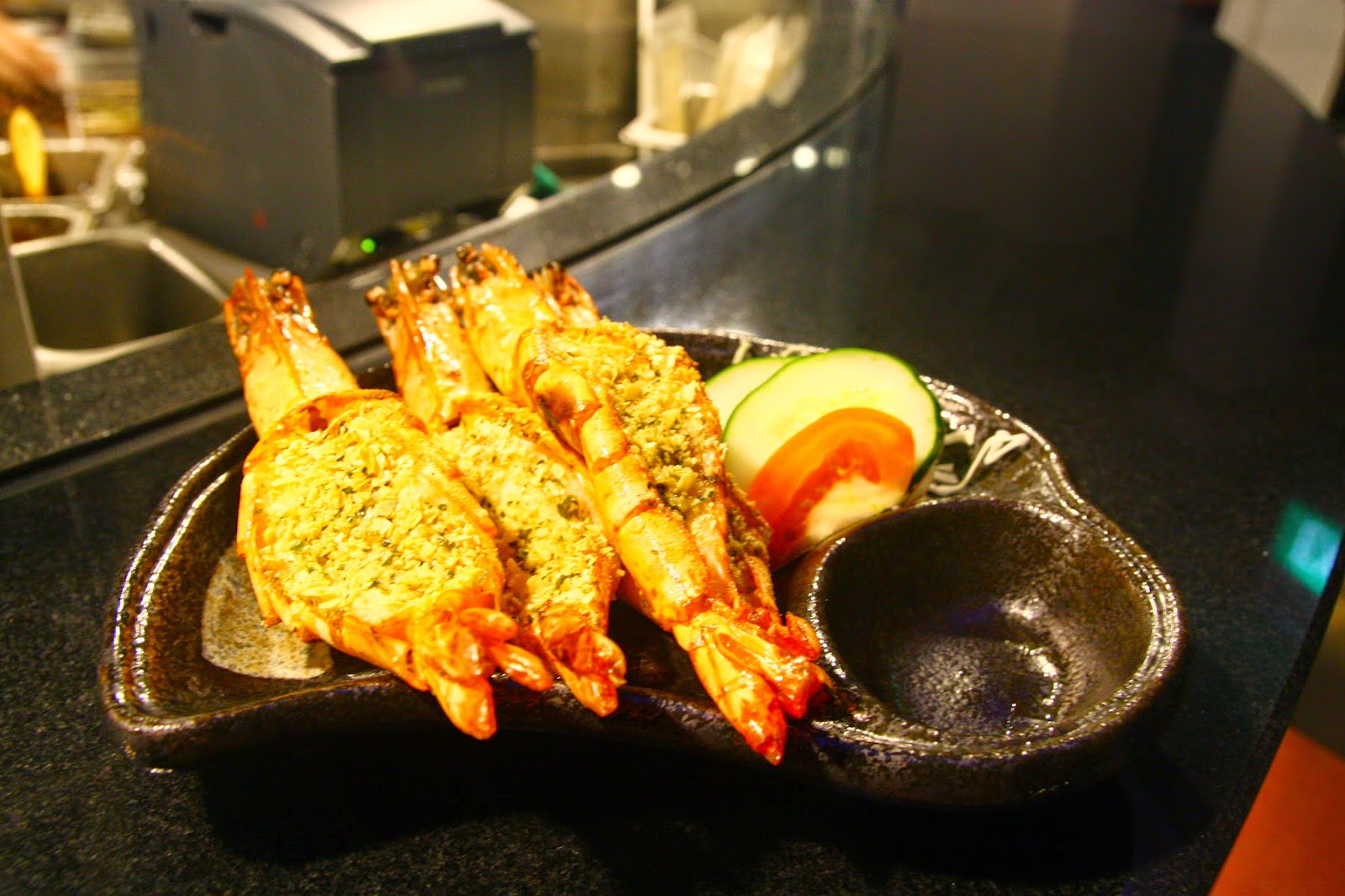 No evening should end without an encore by the Chef and we were treated to a quartet of desserts- Mango and coconut panna cotta, Tiramisu, Strawberry & Chesse Parfait and Chocolate & Hazelnut Mousse cake to round it off. 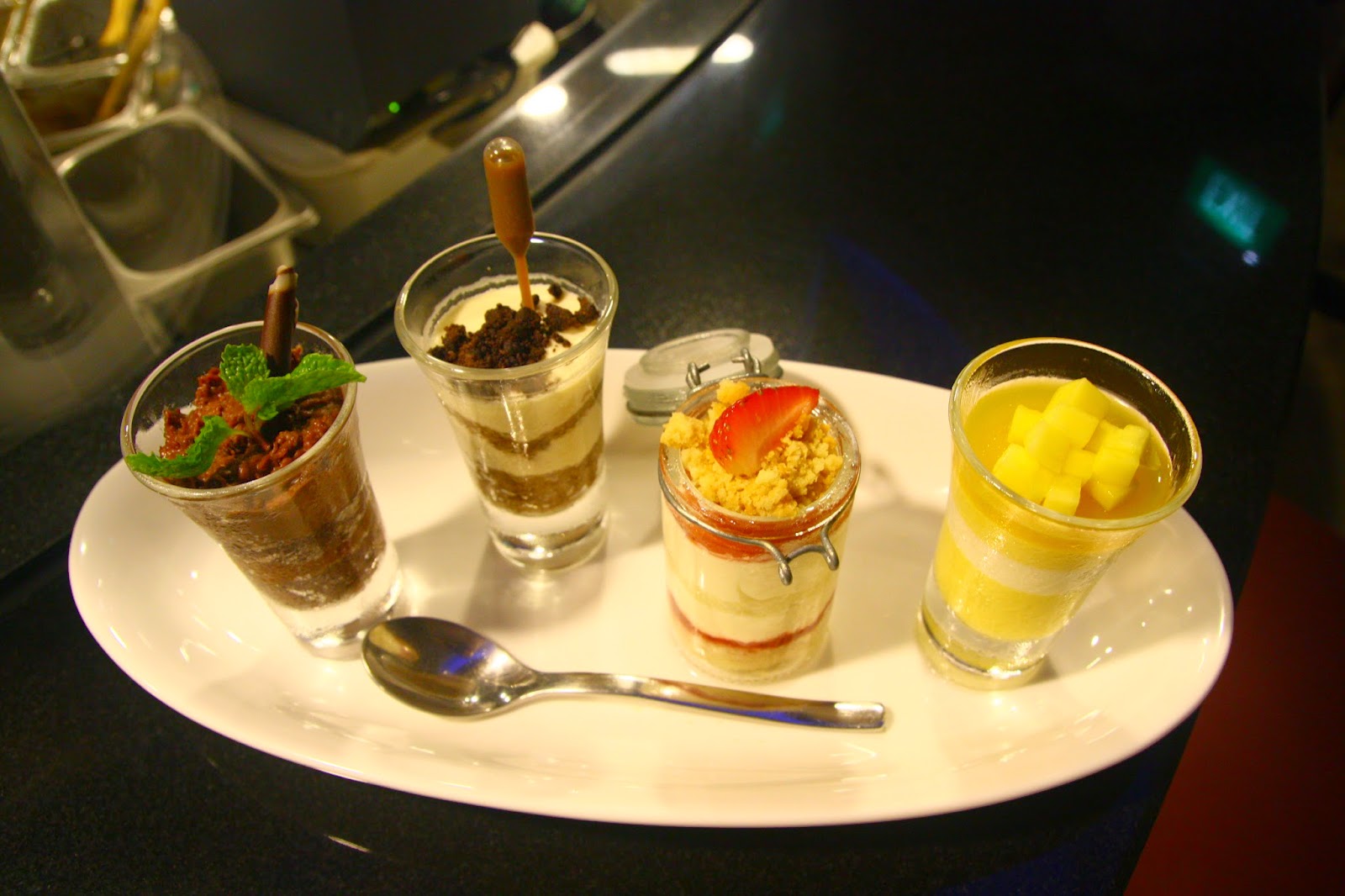 You can't go wrong with a line-up like that and we wanna mention the Tiramisu that came with coffee liquer in a squeezer.  The full strength of caffeine hits you with the first taste. I would much rather start each workday with this than the usual cup of Java. Nevertheless, i wouldnt mind ending my day with this either. 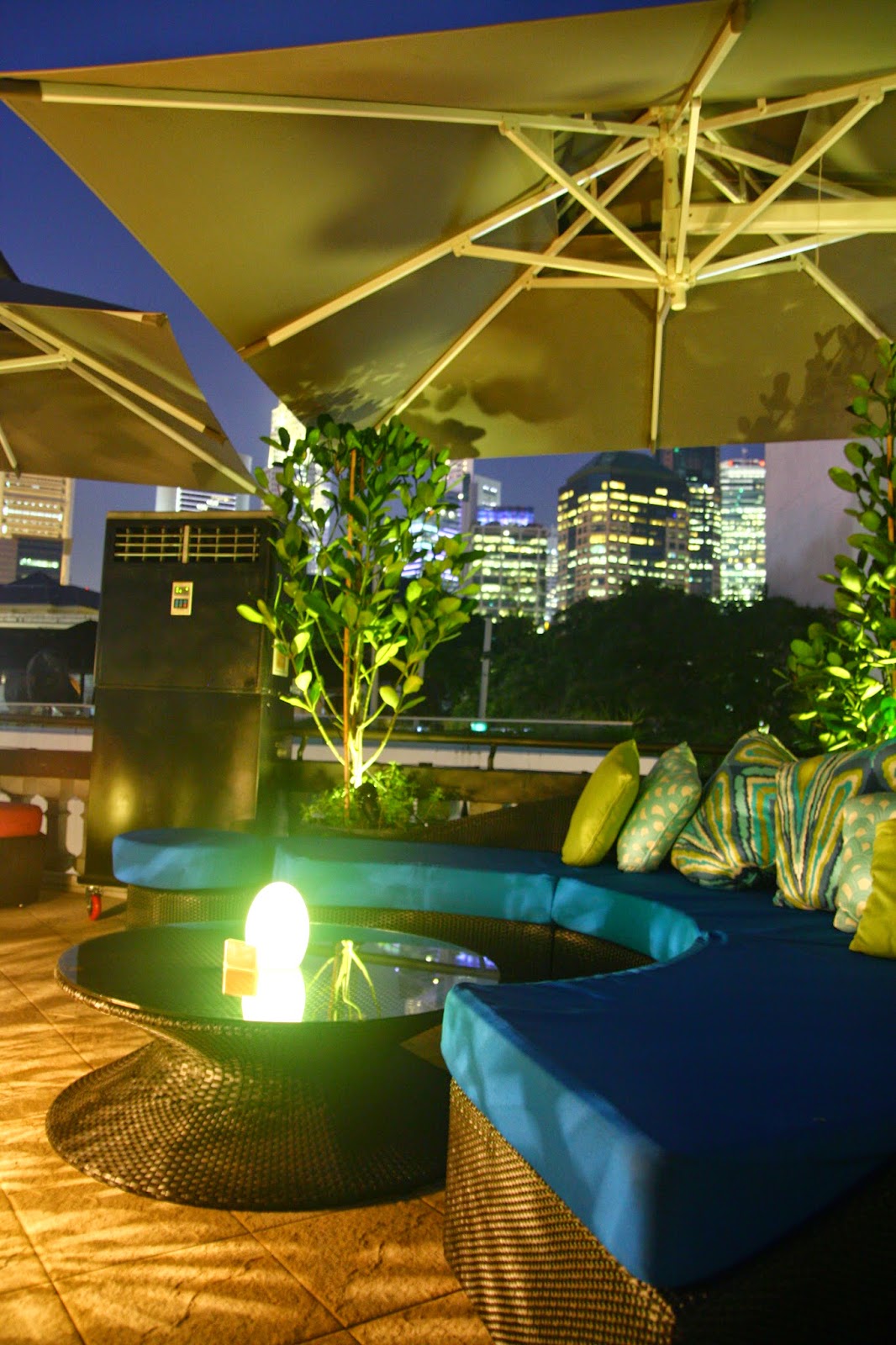 With a light whiff of the charcoal grill wafting through the evening air, it makes you wish your home had a swanky rooftop. It would be perfect for an evening with close friends and quiet conversation over some grilled meats and cocktails. But until then, Breeze at The Scarlet Hotel would suit you just right.